Glasgow is facing another airline defection with Loganair scrapping its service to and from Southend from 3 January. It leaves the Scottish airport with Heathrow, London City, Luton and limited Stansted flights.

The Southend decision is a rare step back for Loganair. It has been highly active this year, most recently (BTN 23 September) when it took over routes linking Edinburgh and Glasgow with East Midlands following Flybe withdrawing its services.

A spokesman said: "We made the decision due to the high number of low-fare options in the Glasgow to London market for which our size aircraft are unsuitable." Loganair will instead increase Glasgow – East Midlands services to three times a day from 24 February.

Elsewhere, Loganair has welcomed its 25,000th passenger (below) since starting operations from Newcastle International Airport. The business traveller from Belgium was handed free tickets for a return trip to the North East.

The tickets were handed over by the airport’s aviation development executive Chris Ion and marketing and communications manager Kate Hall.

Loganair opened a base at Newcastle in March when it took over flights to Brussels and Stavanger following the administration of flybmi and has added six routes since. 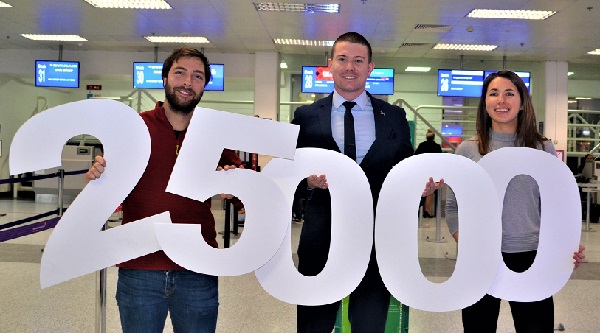