A new weekly flight to Mount Pleasant Airport in the Falkland Islands from São Paulo with a monthly stop in Cordoba, Argentina, is being launched by LATAM Airlines Brazil from 20 November. 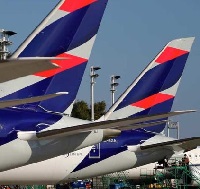 The carrier will fly the route using Boeing B767 aircraft with capacity for more than 190 passengers, and will increase cargo capacity more than seven times. Initially, the company plans to transport perishable products.

LATAM was chosen in December last year to operate the service following a tender process agreed between the UK and Argentinean governments to introduce a new international air link to the Falklands.

Network vice-president Nicolás Salazar said: “This new service doubles the number of commercial flights to the islands and provides direct access to our São Paulo hub and connections to North and South America, Europe, Africa and Asia.

“We are proud to be the only airline group to connect the most iconic island destinations in South America with the world.”

■ In further expansion, LATAM has begun three-a-week Sydney – Santiago non-stop flights. Straight-line distance between the cities is about 11,367km (7,063mi), with a flight time of 12hr 45min. Departures from Sydney are on Mondays, Thursdays and Saturdays.