Celebrations were under way at Sydney Airport in the early hours of yesterday, Sunday, as Qantas landed the first non-stop commercial airline flight from New York after 19hr 16min in the air.

Flight QF7879, a new Boeing B787-9 Dreamlinier, carried 49 passengers and crew whose health and well-being were being assessed in the run-up to the airline’s hoped-for future launch of Project Sunrise flights between Australia and the UK and US (BTN last week).

Data from the tests, from monitoring pilot brain waves, melatonin levels and alertness to exercise classes for passengers, will be used to help to shape the crew rostering and customer service of Qantas’ future ultra-long-haul flights.

Qantas Group CEO Alan Joyce said: “This is a really significant first for aviation. Hopefully, it’s a preview of a regular service that will speed up how people travel from one side of the globe to the other.”

■ In summer 1989, Qantas set a world distance record for commercial jets when its first Boeing B747-400, City of Canberra, flew London – Sydney non-stop in just over 20hr. The aircraft, on its delivery flight, carried two cabin crew and 16 passengers. 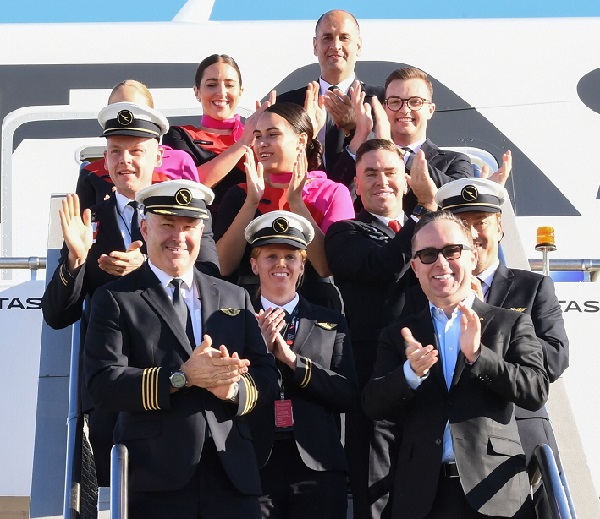 Could it truly be called a 'commercial' flight? My understanding is that it was a delivery flight packed with journalists and company people, none of whom paid for the flight!

..."Id prefer to have a full plane with the current Ryanair seating for this 'No Stopping' route"..."Oh, and maybe take a couple of toilets away to add more seats...I'm sure one toilet will be enough" ?....