BTN last visited York, one of our favourite UK cities, back in 2014. With this most recent trip we have kept away from those places viewed last time (with the exception of Bettys) and if you are thinking of a York experience read the previous review too. The reincarnation of LNER and arrival of Azuma was the excuse, and also the attraction of The Grand Hotel, now fully restored and once the headquarters of the famous railway company. 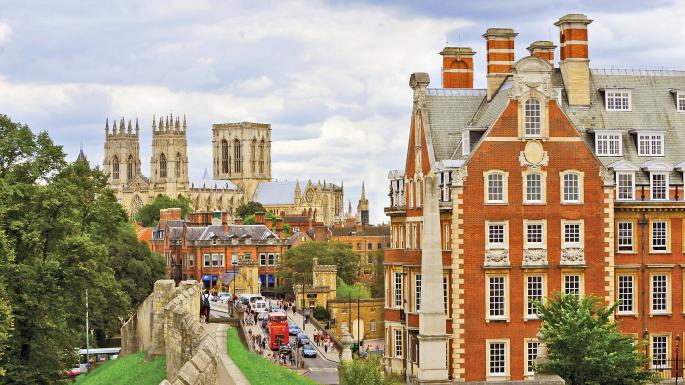 Ours was to be a very short 36hr visit.  No time for the railway museum, the chocolate history, nor York Minster.

The 10:00 from Kings Cross is non-stop and takes 1hr 45min for the 200mi journey and passengers in First Class can avail themselves in the LNER lounge with quick access to the departure platforms.  We have written about Azuma previously.  The train offers a full English breakfast.  There are plenty of alternatives.  Our return journey was the 20:00 on Saturday evening, no full meal but some very nice sandwiches.  Soft drinks only.  The lunch menu looked tantalising. The Standard Class buffet was reasonably priced and all passengers can use the free wi-fi and there are 3-pin plugs too.

A 5min walk from York station, following the city walls, The Grand Hotel is an Edwardian pile opened in 1906 as the headquarters of the then North Eastern Railway (later LNER).  Originally entitled the ‘Palace of Business’ it is York’s only 5-star hotel. With sweeping stone staircases, original wood panelling, parquet flooring and acres of marble it serves as an opulent reminder of the building’s former status as an icon of the golden age of rail travel. Where possible much of the original architectural features have been retained.

The interior of the building is typified by high ceilings, tall windows, lofty arches and wide-open corridors and spaces. It opened in 2010 with 107 rooms, lushly converted offices with all mod cons.  In 2014 a further 100 were added offering a purpose-built style in keeping with the 21st century, with walk-in showers.  As required with its status a 24hr room service is provided.

On the conference front the magnificent Grand Boardroom and adjoining Chairman’s Suite offer splendid settings for meetings and there are a series of rooms providing a range of options for smaller gatherings.  It is a very congenial assemblage with all the latest gadgetry and also full air conditioning.  The Grand Bar, Hudson’s (the ‘fine dining’ restaurant due to re-open in the new year),  and private dining rooms complete a wide-ranging set of options for breaking-out, relaxing and dining.

Opened in early 2019, this state-of-the-art facility offers a packed programme of full and half day courses and workshops under the guidance of head chef tutor Andrew Dixon, a genial Scotsman. Situated in what is effectively the basement, but also with its own street entrance, it is an impressive setting that is proving to be very popular as a catering seminary and also a team building conservatoire.

Our first move was the purchase of the York Pass offering its 50 attractions including a 45min open top bus tour with a live guide.  It was then on to Bettys, Yorkshire’s best known tea room with its Art Deco style modelled on RMS Queen Mary.  In 1936 Frederick Bemont, the Swiss-born founder, was on the ship’s maiden voyage.  He was so taken with what he saw he hired the liner’s architect to furnish his new café in the centre of the town.  Try and book the upstairs tea-room, set times only, when piano music will entertain and Champagne is available.

York is well served with theatres, the Theatre Royal dating from 1744, remodelled since our last visit and now with a new roof and major improvements throughout the Grade II listed building.  It is worth a visit even if not taking in a production.

The slightly larger Grand Opera House is also Grade II listed but only dates from 1902 and is now part of the successful Ambassador Theatre Group.  It specialises in touring productions, with Joseph and the Amazing Technicolour Dreamcoat on during our visit, a great opportunity for local school choirs to join the chorus.  Fifty years since its first presentation, and many revivals and changes, it is still a great evening’s entertainment.  Both theatres are within easy walking distance of the central area. 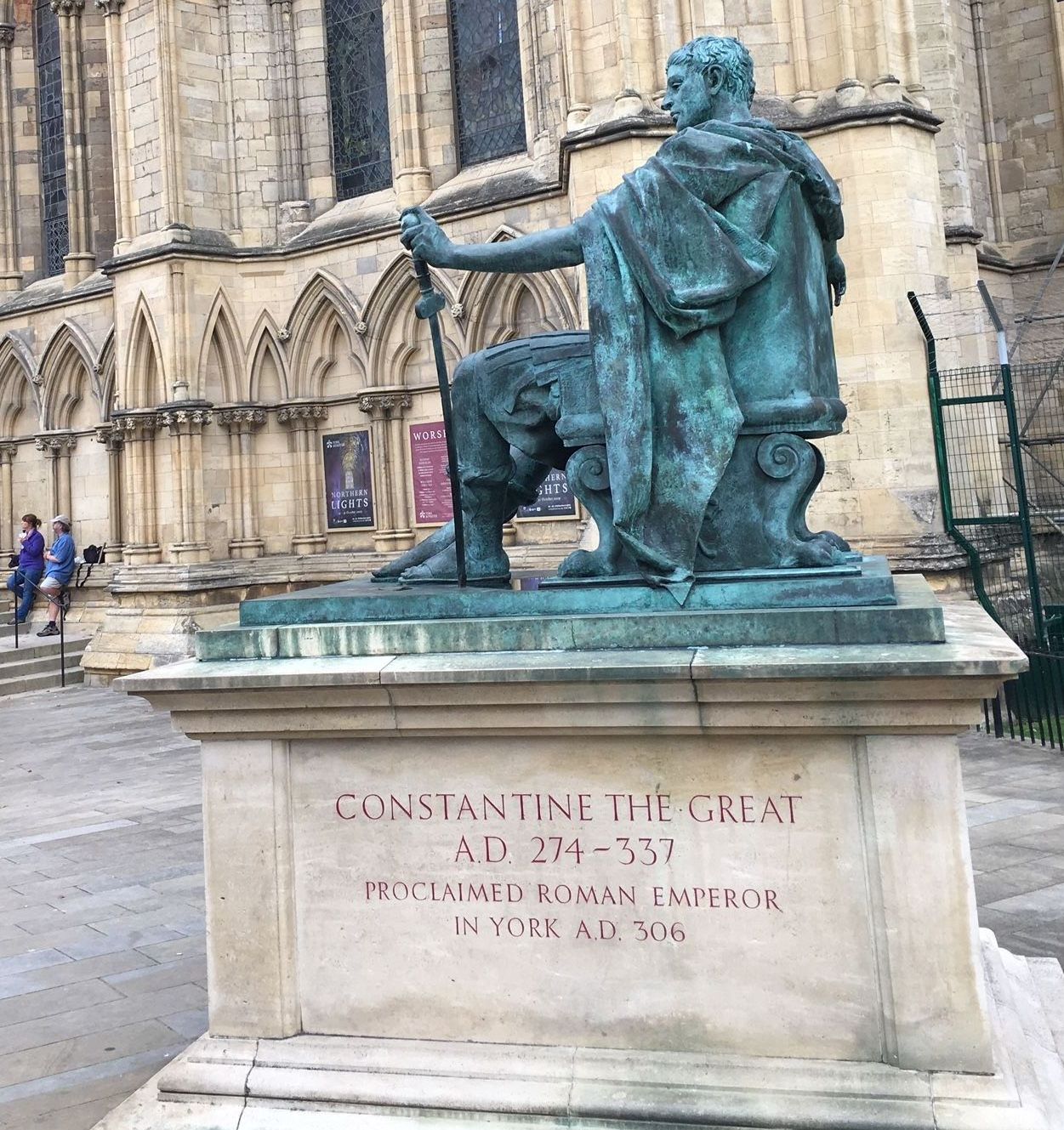 The free York walking tour takes place every day come rain or shine and starts at 11:00  (all year round and other times during busy periods) and takes about three hours, with a coffee stop halfway. Unlike the similar Bath tour (see BTN 14 October) you are encouraged to tip the guide, a true expert on the city.  They don’t have to be locals.  Ours came from Edinburgh.

The tour took in all the major landmarks of the city, and the tales they tell.  Historic York has featured with Richard III, and Henry VIII, whose wife number five, Catherine Howard, age 19, played dalliance whilst in York with fatal consequences.  Constantine the Great, whilst Roman Governor of Britain, was acclaimed Roman Emperor at York after his father's death in 306 AD. His statue is outside the Minster.  We were shown the home of Saint Margaret Clitherow (1556 – 25 March 1586) an English saint and martyr of the Roman Catholic Church, sometimes called "the Pearl of York".

The York Museum gardens offers a look into Roman times and is a quiet locale away from the hustle and bustle of the Minster environs.

We walked down The Shambles with its overhanging timber-framed buildings, some dating back as far as the 14th century. It was once known as The Great Flesh Shambles, probably from the Anglo-Saxon Fleshammels (literally 'flesh-shelves'), the word for the shelves that butchers used to display their meat. In1872 there were 25 butchers located along the street, but none remain although a number of the shops on the street still have meat-hooks hanging outside on which meat was displayed.  It is now very touristy but genuine with a mixture of restaurants and shops as well as a bookshop and a bakery. Shambles Market operates daily and is situated between The Shambles and Parliament Street.

The walk emerged at Clifton Tower, the site of a Jewish massacre in March 1170, where like their forebears at Masada, under severe provocation, the faithful committed mass suicide.

From here it was across the street to the York Castle Museum, the end of one tour and the start of another.

It must be one of the country’s finest historical museums.  Do allow three hours for a visit to the York Castle Museum housed in prison buildings which were built on the site of a castle in the 18th century.  Dick Turpin was the most famous of inmates (his grave is not far away) a man of Essex who became a respected citizen of York, until his masquerade was discovered, the one-time highwayman eventually hung.

The museum owes its existence to Dr John Kirk (1869-1940), a physician, amateur archaeologist, and collector.  In the time before the NHS he would accept small household gifts in lieu of payment from his patients.  These artefacts formed the basis of the wonderful collection of Edwardian memorabilia.

The major feature of the York Castle Museum is Kirkgate, named after the good doctor, a recreated cobbled Victorian street with schoolroom, police cell, and Hansom cab.  It is one of the oldest reinvented indoor streets of its kind in the world, possibly the oldest, and the first to be opened in Britain. It formed the centrepiece of the museum when it opened in 1938.

In 2012 Kirkgate was regenerated after a large restoration project. The timeframe was narrowed down to 1870-1901. Each shop and business on Kirkgate is called after a real business that operated in late Victorian York.  Costumed guides tell you more about each shop, some of which have passed into history and are largely forgotten.  Cooper’s Saddlers, Horsley’s Gunsmiths, Cooke’s Scientific Instruments and Edward Allen Taxidermist.  Some sold to the rich, like George Britton’s grocers, importers of fine teas and coffees; others such as Thomas Ambler’s were grocers to the working class.

A dingy alleyway, called Rowntree Snicket, personifies the poverty of Victorian York including a working class home.  It was Seebohm Rowntree’s famous survey of York’s poor, which led to his ground-breaking report, Poverty: A Study of Town Life, published in 1901.  The Joseph Rowntree Foundation is still with us, an independent organization working to inspire social change through research, policy and practice. York characters (actors) help to embellish the visit.

Another exhibition, opened on 28 June 2014, 100 years to the day that Archduke Franz Ferdinand was assassinated.  This happening sparked a chain of events which led to the outbreak of what was first called “The Great War”.

From the pre-war golden age of peace and prosperity visitors pass by the recruitment office and then meet the horrors of the frontline – from rats to foot rot, shell shock to gas warfare. Back home, daily life in Britain was changing beyond recognition while around the world millions would die as Europe’s empires clashed in the first truly global conflict.

New technology and research are combined with the museum’s extensive military, costume and social history collections to tell the fascinating and often moving stories of the Yorkshire people who lived and died during the war that they said would end all wars. 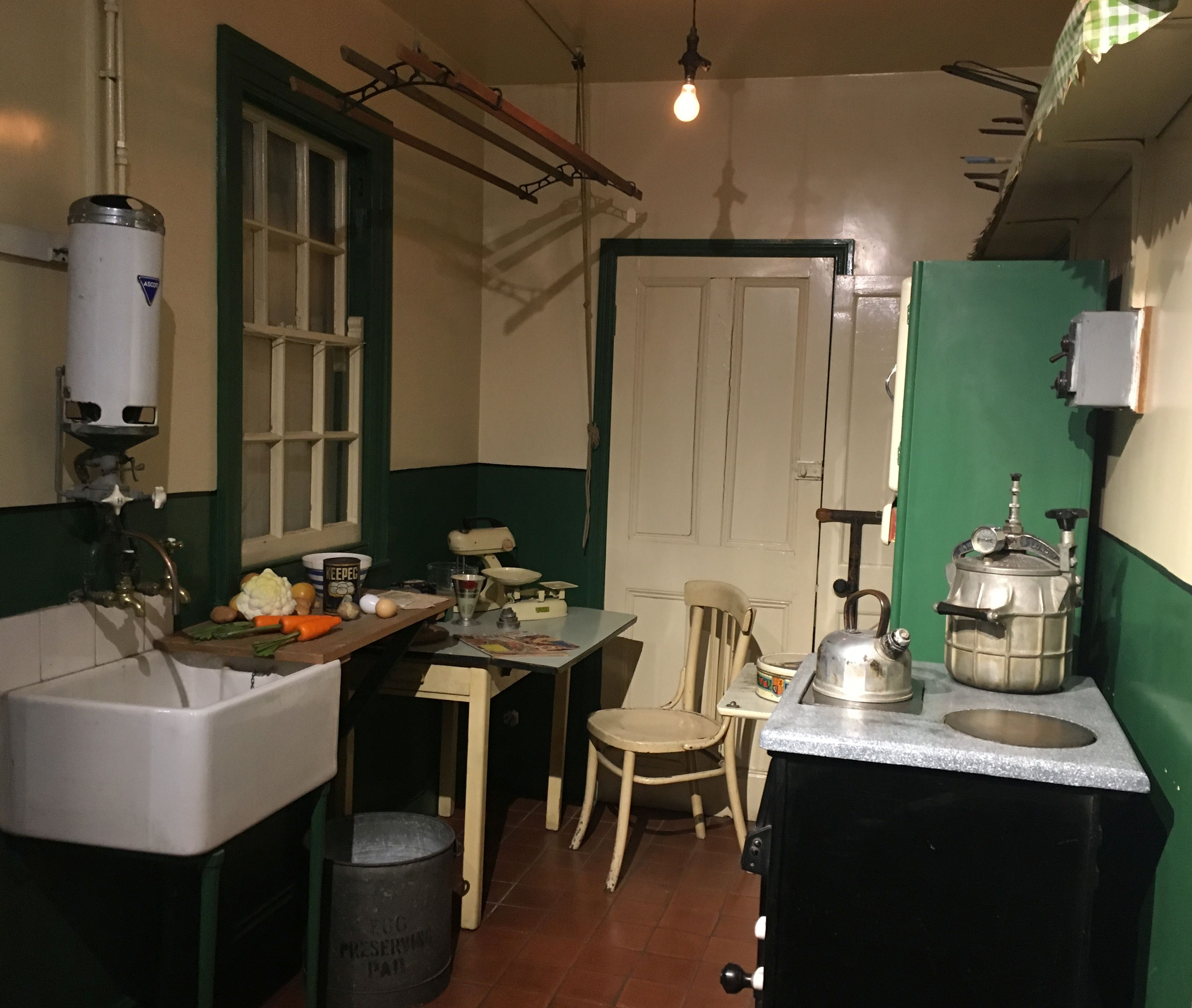 A Sixties exhibition recreates a decade that is still real for many of us but is fast becoming history and which saw momentous change in so many areas of public and private life.  The gallery uses fascinating and iconic objects from social history, art, fashion, military and the exploration of space. Highlights include a Lambretta scooter, a Dansette record player, Beatles singles and fashion by Mary Quant.

The whole museum is designed for the edification of adults and children with plenty to amuse the little ones.  Bikes, bath toys, computer games, Lego and beautiful handmade dolls are among the toys on show from the last 150 years, and the kids are encouraged to have fun in the castle-inspired play area or head off on the children’s Teddy Trail around the exhibition.

For BTN it was back to the railway station.  If you fancy a shopping pre-holiday trip with a difference one of the best organised local tourist authorities in the country has now published www.visityork.org/whats-on/christmas 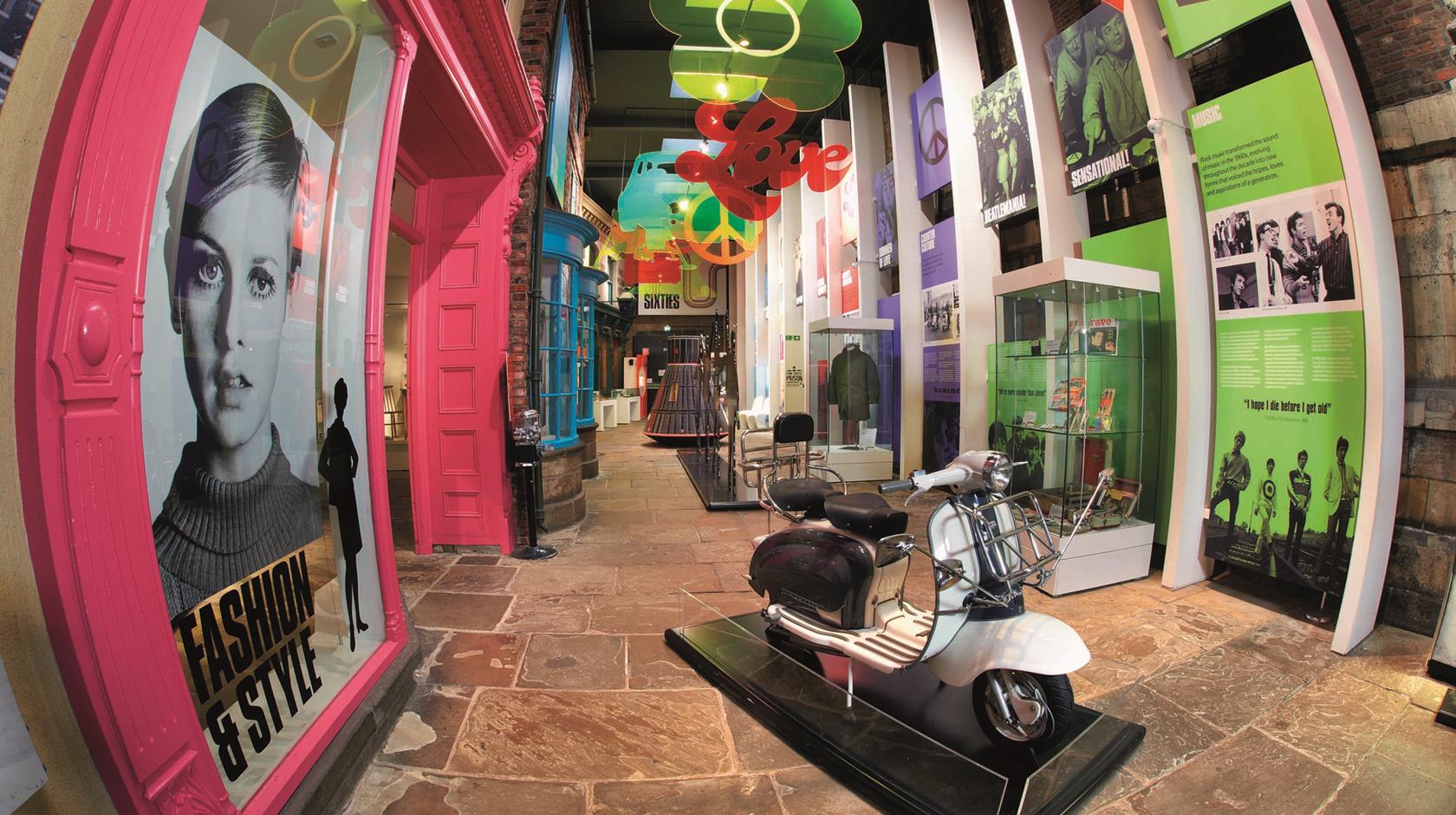