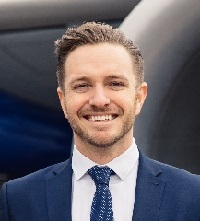 He was most recently general manager commercial and customer for CityFlyer and led a team of more than 300 at London City Airport as services expanded from just six routes to more than 30.

At Stobart, Hayhoe will be responsible for airline relationships and marketing and delivering passenger growth across the company’s airports, with his main focus on Southend and its aim to be “London’s next big airport”.

London Southend is growing rapidly, with some 50% more customers so far this summer. Ryanair and Loganair recently started operations and easyJet has based a fourth aircraft there, serving more than 30 destinations.

The airport, named recently by Which? for the sixth year in a row as the best in London, will grow further in October and November with the addition of Wizz Air services to central Europe.

Hayhoe said: “It’s great to be joining Stobart Aviation at such an exciting time. I’m looking forward to developing relationships with all our customer airlines and welcoming new ones, with a specific focus on delivering more than 5m passengers at London Southend.”