Another seven days of strikes are looming at Ryanair as pilots threaten to continue their industrial action in a row over pay and conditions. The next round is due on 18 September for 48hr, then 21, 23, 25, 27 and 29 September for 24hr each. 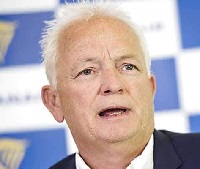 It comes as the carrier’s chief people officer, Eddie Wilson, took over last week as Ryanair CEO to run the main airline after Michael O’Leary was promoted to group CEO.

The British Airline Pilots Association (BALPA) said its members wanted similar agreements to other airlines on pensions, loss of licence insurance, maternity benefits, allowances and pay but Ryanair had refused to seek conciliation.

BALPA general secretary Brian Strutton said: "While this action has considerably disrupted Ryanair, forcing them to engage contractors and bring in foreign crews to run its operation, it has had limited impact on the public's travel plans.”

Ryanair maintained its aggressive stance, repeating most of its pilots had flown during the earlier actions. "During five days of BALPA strikes Ryanair flights to and from UK airports operated as scheduled with zero cancellations,” the airline said.

"We again call on BALPA to return to talks as these failed strikes have not achieved anything."