Emergency at sea. French marines to the rescue

Last Wednesday (28 August) around 09:30, all 5,100 passengers and crew on board P&O Ventura were alerted (woken in many cases) by the authoritative voice of Captain Neil Turnbull declaring an emergency. 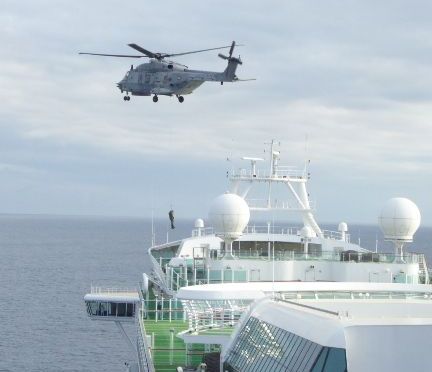 The ship was in the Bay of Biscay, northbound between Santander and St Peter Port, Guernsey.

While the medical facilities on the ship are superlative, the senior doctor had called for immediate land-based help with a 54-year-old male passenger complaining of stomach pains. Within 6min of the radio call, the French Navy (Marine Nationale), based at Brest, had an NH190 helicopter in the air with medical support, arriving just before 10:00.

Passenger access to most of the open decks was closed and balcony port-side guests warned of the consequences of the downdraft. BTN viewed the whole highly-professional operation from Deck 18 at the stern of the ship.

Four French navy staff were lowered individually from the hovering machine with a stretcher. The situation was rapidly assessed, the patient hoisted upwards, quickly joined by the rest of the team, and with a wave, goodbye.

The patient was taken to a French hospital. During the whole process of evacuation, the captain informed all aboard of what was happening and later on he was able to tell us that the invalid was in a stable condition. French media reported the incident.

Is Ventura now the world’s most experienced helicopter evacuation ship, at least for this year so far? This was the second emergency of 2019. On Sunday 24 March, off the Isle of Wight and in darkness, Ventura successfully transferred an unwell crew member to Southampton General Hospital via a Sikorsky S-92 of HM Coastguard.

Queen Mary 2 had at least three helicopter rescues thus far in 2019. I was aboard for two on a westbound crossing leaving Southampton 28 April. The first occurred about 3am in the English Channel when the captain announced the rescue; the second at breakfast time. The ship turned around to allow the rescue from the Isles of Scilly. The third occurred in late July when a friend aboard described a rescue off Nova Scotia.