Expansion plans at Glasgow Airport including welcoming a fifth Airbus A320 family aircraft to the Scottish base and announcing a new domestic route between Glasgow and Birmingham from next spring were unveiled (below) by easyJet last week.

The A320 family aircraft will be based year-round, providing 340,000 more seats. It joins two 156-seat Airbus A319 and two 186-seat A320 aircraft already there and will create around 50 jobs for Glasgow-based flight, cabin and ground crew.

The new route between Glasgow and Birmingham will operate 13 times a week all year, with flights starting on 29 March. Seats are due to go on sale in the coming weeks.

EasyJet’s first flight, EZY121, took off for Glasgow from Luton on 10 November 1995 and the airline says it has remained committed to the airport ever since by  maintaining a continuous operation and flying more than 34m passengers to and from the city.

Today, easyJet claims to be the largest airline in Glasgow and operates up to 294 flights a week across 19 routes. It was the first airline to carry 1m passengers in a year from Glasgow and says passenger numbers continue to grow. 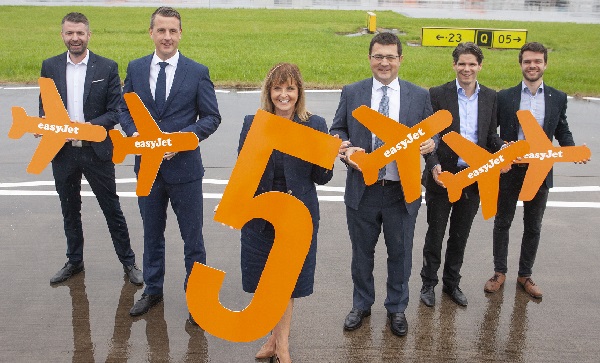