Airbus US A220 line opens

Manufacture of the Airbus A220 in the US began officially last week as the first team of production staff started work at the company’s production facility in Mobile, Alabama.

It followed the employees’ return from the A220 programme primary final assembly line in Quebec. The A220 was known formerly as the Bombardier C Series.

Airbus Americas chairman and CEO Jeffrey Knittel said: “The expansion of our commercial aircraft production in Mobile to a second product line – with 400 additional jobs to support it – further solidifies Airbus’ standing as a truly global aircraft manufacturer.

“It confirms Airbus is an important part of America’s manufacturing landscape and with Mobile, and our production network in Asia, Canada and Europe, we have strategically created a worldwide industrial base to serve our customers.”

Airbus announced plans for the addition of A220 manufacturing in Mobile in October 2017. The first US-made A220 – a Dash-300 model destined for Delta Air Lines – is scheduled for delivery next year. The facility will eventually produce 40-50 A220s a year.

Airbus used last week’s development to emphasise its links to the US in a riposte to past allegations of unfair competition, noting it had “strong and longstanding” ties as a major partner of US aerospace companies and workers. 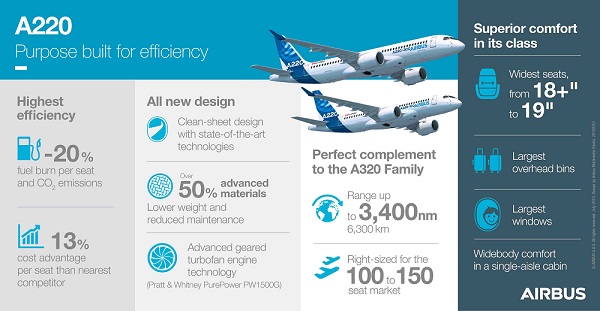