ON TOUR SPECIAL: The Meetings Show

Once again, John Burke was with his camera at London’s global workshop for the events industry. Now in its seventh year, the Meetings Show at Olympia has been called the major opportunity for hosted buyers to evaluate conference products at home and abroad. 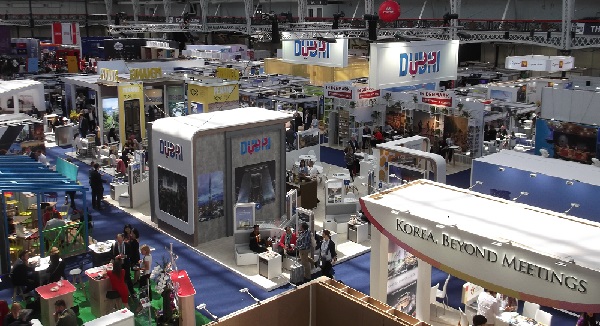 The seventh annual Meetings Show produced some impressive facts and figures, including high demand for training and networking. It was preceded by an exclusive conference that attracted 350 hosted buyers who heard a prophetic keynote address by Gerard Lyons, an economic adviser to government, followed by a discussion between three other public officials about the prospects for business events.

Giles Smith, deputy director of tourism in the Department of Digital, Culture, Media & Sport, was flanked by Kerrin MacPhie of VisitBritain and Nigel Farminer, the Home Office’s head of border security. Their overall view, reflected in comments at the show, was that Brexit would not affect incoming business.

The grand total of hosted buyers, who had their own lounge at the show, increased to more than 900, while their pre-scheduled appointments showed a rise of 18% to 12,000-plus,1,000 of which were with one hotel chain alone. Altogether, the show attracted about 4,500 participants, while exhibitors surpassed the previous 700 by 9%, including a larger number from the continent.

Switzerland was among these 35 countries represented, with the usual heavy presence from members of the European Union. Canadian cities like Ottawa were prominent, and a newcomer was Peru whose representative, Jaime Cardenas, told me “incoming incentive is our aim”.

Aerolineas Argentinas was also among 28 exhibitors from the Americas, two more than from Asia. The Asian contingent included Singapore and Penang, which has doubled its previous representation as promised.

Australasia had a small presence, while the African contingent of 26 included Rwanda, returning with its airline, as well as the United Nations conference centre, seating 1,300, in Addis Ababa. Two airlines from the Persian Gulf also braved the show, the only other foreign carrier being Air Malta.

Yet the vaunted 18% international increase relied partly on the fact that 33 countries around the globe were represented solely by local consultants Able Maxx. And it was rivalled in Estonia and Greenland only by Moulden, also based in England, that ensured the presence of Montenegro and meetings on ice … in  Antarctica. Both suppliers were among the 61 listed under destination management, while one of them additionally featured among the 36 meeting service providers that also included Venues of Excellence.

There were 55 convention bureaux from abroad, including Prague, Vilnius and Niagara, plus 26 British ones as well as more than 100 venues that included 15 sports centres and 23 historic or rare places for meetings.

The usual clutch of campuses included St Andrew’s and Warwick, whose Sarah Dietrich commented: “Enquiries are at high level despite the political uncertainty.”

West Midlands combined its presence for the first time with 13 partners, including the NEC and Birmingham Airport, but  London dominated the show regionally with 48 stands, far outnumbering those of Wales, Scotland and Ireland plus Isle of Man.

Likewise, 225 out of all 768 exhibitors were hotels, including a score of chains and a confusing number of brands such as those of  Deutsche Hospitality. I counted nine Marriotts to outnumber those of Ritz-Carlton which, in turn, were more than the six each from Hilton and Westin. Also there were Wyndham, Real, Radisson, Best Western.

Dotted amid the stands were several theatres that ensured a continuous programme of lectures totalling 40 hours. The theme was the seven stages of event planning, and the subjects ranged from sponsorship to sustainability and from finding a venue to free technological tools.

Participants in the event were also able to attend several networking events at Olympia and elsewhere in London, while Brighton hosted a familiarisation trip immediately afterward with Aberdeen planning something similar soon.

The Meetings Show is staged by Centaur Live four months after its Business Travel Show. Olympia also hosts International Confex, so that several exhibitors such as the ubiquitous Macdonald Hotels are present at all three. What is different is Meetings’ intricate management, including an advisory board whose 17 members are with companies as diverse as Barclays, SoolNua and MD.

There is also partnership with 52 bodies ranging from the Event Marketing Association to the Association of British Professional Conference Organisers, while some of these are also numbered among 16 supporting associations. Chief among the latter are the twin international associations representing conference cities and venues.