In over 20 years of reporting cruising Business Travel News has never highlighted three ships , new or newly furbished,  in the same monthly issue, all outstanding in their own way, innovative and each aimed at a different market. 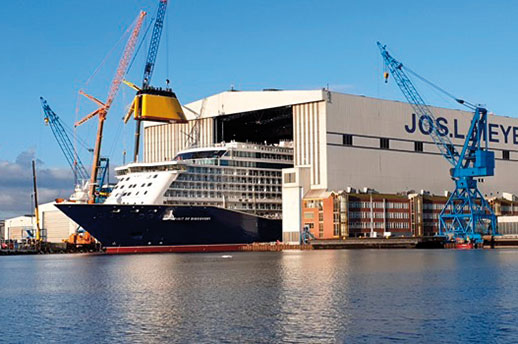 Following the recent announcement that HRH The Duchess of Cornwall will become the Godmother to Saga Cruise’s new boutique cruise ship, Spirit of Discovery, more details have been confirmed of the naming ceremony next Friday (5 July).  Following the successful completion of her sea trials, Saga has also today announced that it has officially taken ownership from ship builders Meyer Werft.

The Spirit of Discovery’s naming ceremony will see 500 invited guests joining Camilla, the Saga management team, crew and employees to pay homage to one of the great British traditions of summer; a contemporary garden party. The extensive afternoon tea will be prepared by Saga’s celebrity chef Kevin Woodford working with Selwyn Stoby, the former executive pastry chef at Buckingham Palace and Paul Gayler, the former executive chef of the Lanesborough Hotel.

The Port of Dover quayside will be transformed, with grass grown in Yorkshire. There will be traditional bunting and table settings, stunning foliage, florals, trees and parasols. Guests will be served Spirit of Discovery sparkling wine, specially blended by Kent vineyard Hush Heath for the ship, and Anno Kent Gin, from nearby Marden.

The celebration cake, a two-metre-long replica of Spirit of Discovery, will be designed and made by Mark Tilling, winner of Bake Off Crème de la Crème, and cut by The Duchess of Cornwall. During the official naming ceremony, guests will be entertained by The Band of Her Majesty's Royal Marines Collingwood and the Morrison Orpheus Choir and the ship will be blessed by The Right Reverend Trevor Willmott, Bishop of Dover, before being christened by The Duchess with a Jeroboam of the specially-created Hush Heath Spirit of Discovery English sparkling wine.

At the handover was exultant. A second ship has been ordered: “Now we have completed the formal ownership handover of Spirit of Discovery, we cannot think of a better way to mark the launch of our pioneering new boutique cruise ship than with the ultimate British summertime event; a garden party with a sumptuous afternoon tea.  As far as we’re aware, this is the first time any ship naming ceremony has been celebrated in this way.  This unique afternoon will symbolise a key moment in both the history, and the future, of Saga. We couldn’t be more honoured than to have HRH The Duchess of Cornwall joining us for this prestigious day.”

Following her ‘First Arrival’, on 28 June, Spirit of Discovery will become the first cruise ship to be named at the Port of Dover for over a decade, and the first to be docked at Berth 4 in the recently developed £250m Dover Western Docks Revival.

Before the afternoon’s formal proceedings, The Duchess of Cornwall will be given a tour of the ship, which epitomises the best of British contemporary boutique hotel style and elegance. Her Royal Highness will view some of the 1,000 artworks on board, many of which have been created by artists working in Britain, as well as the suites named after the BBC World Service shipping forecast.  The Duchess of Cornwall will meet Captain Burgess and his officers and crew as she tours the impressive new British boutique hotel at sea. 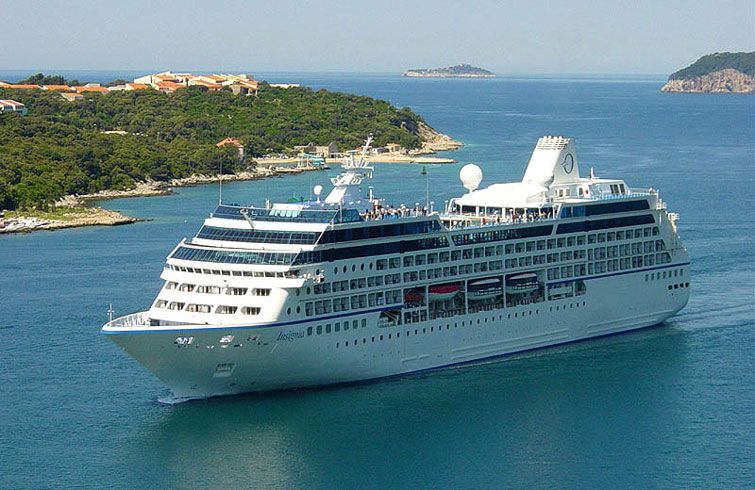 It is amazing to think that the Gulf War was the emergence of one of the most successful class of cruise ships ever built.  Edward Rudner, founder of Alamo Car Rental, got it right when he conceived and had built eight identical 30,000-ton, 684-passenger ships for his Renaissance Cruises, the R Class, in the late 1990s.  What Rudner did not know was that war in the Middle East would destroy the cruise market for a short period and also his cruise line.

Stepping aboard R1, now Oceania Cruise's Insignia, at Southampton just over a week back, the feel is of a brand-new ship, beautifully manicured, or as the company puts it "re-inspired".

The numbers are certainly impressive.  Oceania is spending $US100m on its four Regatta-Class ships, which when completed shortly will involve more than 1,000 craftspeople and artisans.  All up, the ships will receive 1,368 new suites and staterooms, 1,400 new marble bathrooms, 8,000 new light fixtures and 12,000 new sofas and chairs.  Regatta, Insignia, Nautica and Sirena will sail the waters of the world.

"Our Regatta-Class ships are like second homes to our loyal guests and travel partners," Oceania president Bob Binder said when taking Insignia back into the fleet earlier in the year. "They don't build ships like these anymore, which is why this re-inspiration project is such an important milestone in our company's 15-year history. 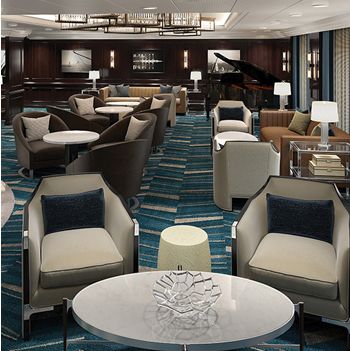 "We are maintaining the intimate surroundings and personal attention that our guests love, while at the same time setting a new standard of style and elegance for small ship cruising."

On arriving onboard one is impressed with the sparkling new Grand Staircase framed by intricate railings and balustrades inset with crystal accents.

Designer residential furnishings from Baker and Donghia and fabrics from Rubelli and Kravet adorn public spaces.

You can of course feast in your stateroom but who would want to with a choice of six dining places any evening, at no extra charge, and a guaranteed visit on every cruise.  The cuisine has been created by world renowned master chef Jacques Pepin.  No chance on a quick visit to really appreciate the offerings but the service and wine choice indicated that guests will be severely pampered when it comes to eating.

Insignia came in from Bordeaux, with next stop Liverpool followed by a North Atlantic crossing to Miami.  Cuba is supposed to be next up but will probably be replaced by the Caribbean.  Regatta is currently based at Seattle and at the end of the year will cross the Pacific, whilst Nautica is in Northern Europe and Sirena is summer based in the Mediterranean.  The busy and popular Oceania ships operate with a staff to passenger ratio of just 1.7 passengers for every staff member. 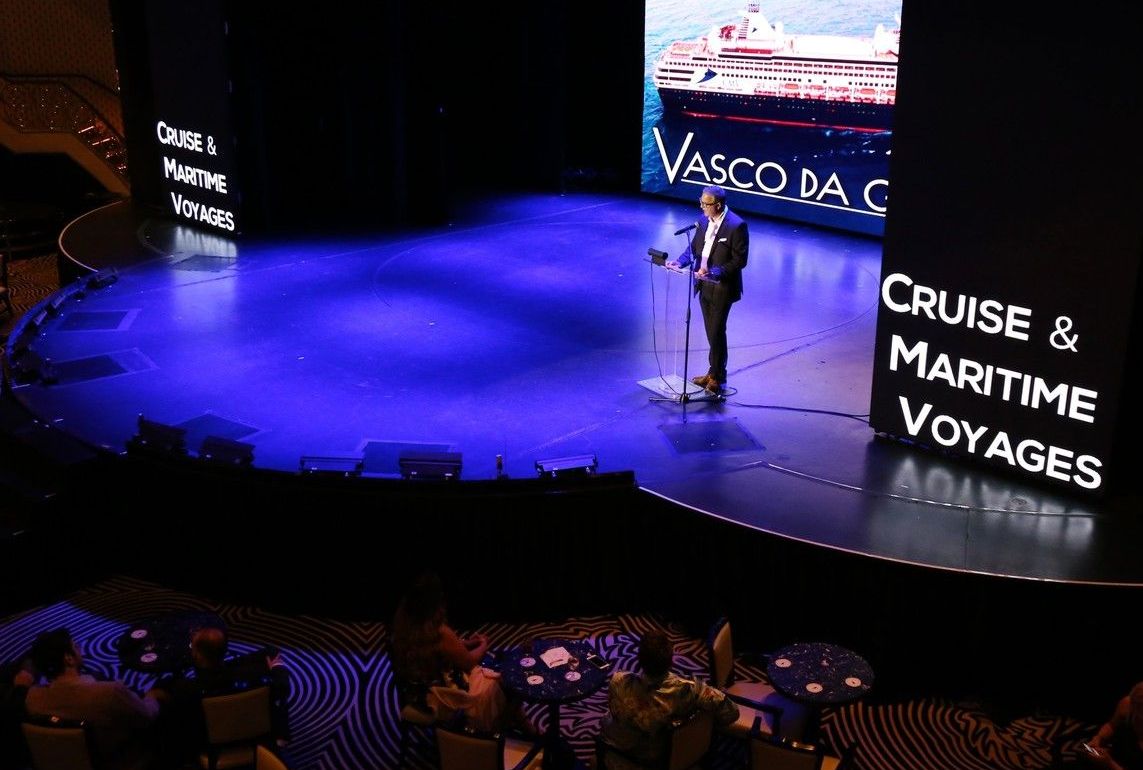 This summer she will operate cruises in the German market for CMV’s TransOcean Kreuzfahrten out of Bremerhaven and Keil, before again returning to Tilbury 9 October and embarking on a 53-day meander to Sydney (Australia).  CMV says this is already nearly full with only some balcony cabins available.

Vasco da Gama is added to a fleet that includes Columbus, Magellan and Marco Polo.  At a reception onboard Group Commercial Director Chris Coates hinted that she might well be joined by at least one more ship in the not too distant future.

Launched in 1993 as Holland America Statendam she was the first in her class and fitted out to the high standard the Dutch Carnival subsidiary required.  This is very much the case as a quick inspection revealed.

Let us hope that if CMV acquire another ship shortly they go for a great explorer’s name again.  It does not have to be exotic sounding and Sir Frances Drake will do!  He was the second man to circumnavigate the world.

Regular Tilbury users should note that work is progressing fast with a new car park opposite the terminal.  This will allow passengers to offload their baggage to the port staff, park their car, and walk straight to the check-in.  The much-refurbished London Cruise Terminal Tilbury has a café for meeters and greeters, with a small model of the Empire Windrush which used the facility.  Ships transiting the port are, arrangement, able to make use of a fast river ferry operation to Tower Bridge.  There is also the Tilbury to Gravesend (Kent) ferry which takes 10 minutes and operates throughout the day.

At 55,820gt the new ship can accommodate 1,220 passengers in 630 cabins including 120 balcony cabins and 29 suites. Vasco da Gama was fully refurbished in 2015.  She has a fully retractable roof over the main, central, swimming area with a small pool in the stern.  Compared with Columbus she is smaller, but has more balcony cabins, and these for the most part larger.

The new ship offers a wider choice of restaurants and dining options.  A first for CMV, Vasco da Gama will offer flexible dining and timings will not be restricted to specific sittings. Guests will be able to dine at any of three main restaurants between 17:30 and 20:30.  One which offers a classic menu with a twist of British cuisine will be open for all three main meals. For dinner the other restaurants will present a choice of styles, one Asian and the other Mediterranean.

The Club Bistro will offer buffet style food for breakfast, lunch and dinner. Passengers can choose to dine at ‘The Grill’ or the ‘Chef’s Table’ at a supplement.

The Tilbury introduction included a night stop for UK travel, support and media friends, just about time for a very quick walk around and not much more.

Chris Coates presented an update on CMV emphasising how well it was doing now offering 10 ex-UK ports. The same Hollywood two-tier show lounge also played host to the evening entertainment, and yes it was Mama Mia (in part) but very good.  The show team then performed individually for an enthusiastic audience high up in The Dome nightclub overlooking the bow.  Breakfast was speedily provided in the Waterfront restaurant, including kippers, not provided for this writer at home due to their less than pleasant aroma.

If you want a leisurely cruise to Oz get in quick. Not much space left. Vasco da Gama departs Tilbury 9 October.  Leave the ship in Sydney 1 December, do whatever, and pick her up again in Perth 12 February 2020 arriving back at Tilbury 23 April 2020.