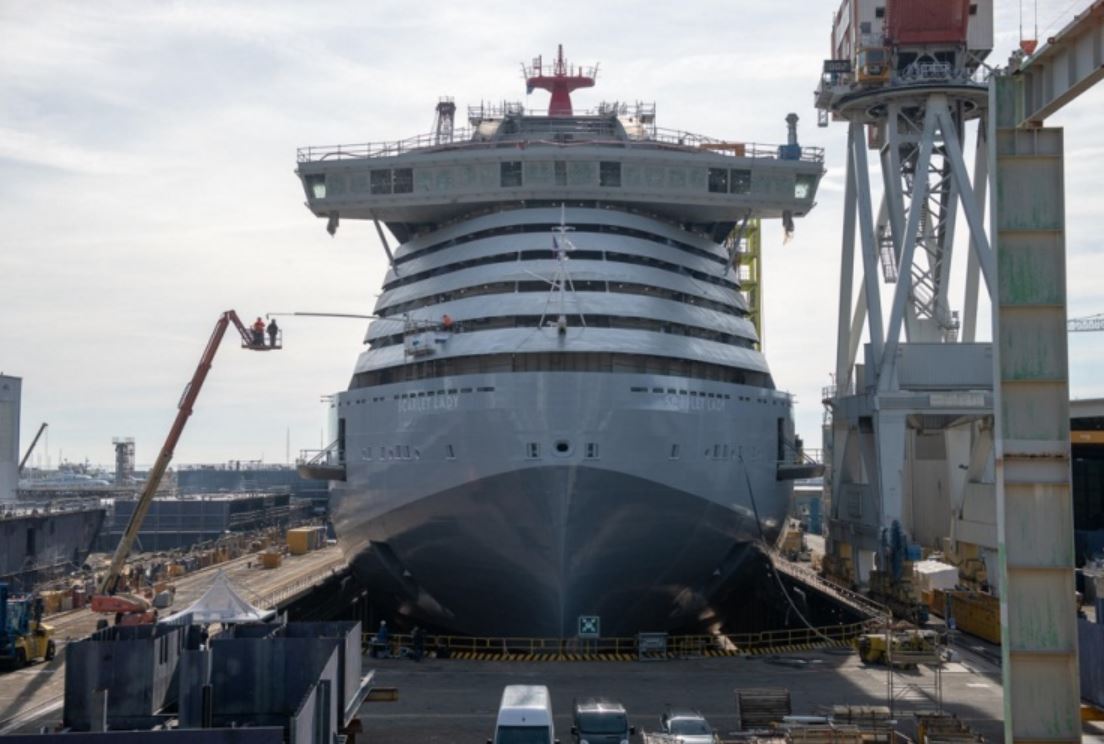 In a series of UK-based events Sir Richard Branson’s Virgin Voyages has set out its marketing tactics as it prepares for the introduction of the first ship Scarlet Lady early next year.

The 2,700-passenger liner will sail from Genoa where it is under construction before arriving in the UK in late February.  She will call at Dover and Liverpool before homeporting in Miami.  From what we have seen so far everything about the ship is going to be very trendy and travel agents – known as First Mates by the line – will join media and VIPs at several exclusive events on Scarlet Lady before the vessel leaves UK waters and crosses the North Atlantic to Florida.

Just two weeks ago in London, deep under the ancient Blackfriars railway arches, there was an amazing launch party named “Scarlet Night” setting the theme for the whole venture. It was brought to life with extraordinary music and performances along with a featured guest performance from Mark Ronson as Virgin Voyages also revealed it was expanding its partnership with the music producer and DJ.  The British artist has joined the Virgin Voyages’ Creative Collective – a group of artists and designers which has collaborated with the line.

Ronson will create a series of pre-voyage and onboard playlists for passengers, as well as curating the vinyl record selection in the ship’s RockStar Suites and the onboard music shop called Voyage Vinyl.

Ronson is also scheduled to play four times at The Beach Club, Virgin Voyages’ private beach in the Bahamas, starting on 9 July 2020.  Also lined up to perform is DJ and record producer Diplo.

“Sir Richard Branson and the Virgin brand were legendary game-changers in the music industry and it’s a thrill to join them as they bring that same spirit to sea travel,” Ronson said.

Virgin Voyages' CEO Tom McAlpin confirmed that Scarlet Lady will call into the UK on the way to its home base.  McAlpin made the announcement alongside Sir Richard Branson, who made a surprise appearance at the Cruise Lines International Association (CLIA) Conference in Portsmouth.

He also revealed that the line's plan at this stage is for all its ships to be adults-only: "Adults-only is the plan," he said. "Mums and dads need a vacation too. Feedback indicates that's what our target market wants. Of course, we have to be flexible so it might change."

He added: "We’re not about stuffy service or acres of marble" – and even questioned the age-old tradition of requiring passengers to have their bags out in the corridor the last night of the cruise and be off the ship early next day, although he didn’t elaborate on how that could be avoided.  Given the short length of the cruises, they start from four nights, and the lack of any formal dressing up, perhaps only roller bags will be needed for the majority of guests.

"We are about quality and not giving sailors (Virgin Voyages name for passengers) a big bill at the end.”

Virgin Voyages' prices include all dining (there is no buffet), wi-fi, group fitness classes, soft drinks, teas, coffee and still and sparkling water.

There will even be "reef-friendly" sun cream dispensers on the top deck for passengers to use.

Virgin Voyages has three more ships on order for delivery between 2021 and 2023.

At CLIA Branson, dressed in a space suit and wearing a tee-shirt emblazoned with the words "My other ship is a spaceship", ran onto the stage and revealed he had never been on a cruise but had always wanted to own his own cruise line.

He told delegates: "I hate buffets – I want a very different type of cruise. I want to get people on a cruise who have never cruised before".

He also revealed that he had a godmother in mind for the ship, but was waiting for her to confirm.

Scarlet Lady will be sailing four and five-night cruises to the Caribbean from April next year. McAlpin said back-to-back bookings, creating a nine-night cruise have proved popular in the UK.

From the start, Virgin Voyages has been all about changing the cruise experience to attract people who have never set foot on a ship.  It’s something of a gamble on ships that are bound to be controversial due to less than conventional design elements.

Scarlet Lady will have no main dining room, no set dining times, no dress code and no buffet.  One's reaction sitting near bikini clad young ladies (or even older ones) during the evening meal remains to be seen.  It will also have an industry first – the first tattoo parlour at sea.

“I’m thrilled to be part of the Virgin Voyages’ Creative Collective, helping lead the charge in music. Sir Richard Branson and the Virgin brand were legendary game-changers in the music industry and it's a thrill to join them as they bring that same spirit to sea travel,” Ronson said.

The first cruise scheduled 1 April 2020 will be from Miami to Havana (Cuba), a controversial destination but in keeping with Branson’s publicity heritage.

Scarlet Lady comes in at 110,000 tons and has already floated out at shipbuilder Fincantieri, Sestri facility near Genoa (Italy).  She has 1,430 cabins, 17 decks, 13 of which are accessible by passengers.  On deck 15, there are 78 "RockStar" luxury suites and 15 of them will be "Mega RockStar Suites".  In total 2,770 passengers can be accommodated and looked after by 1,160 crew personnel giving a ratio of 2.3 passengers to crew.

Some of the interior designers for the nine restaurants include: Roman and Williams Concrete based in Amsterdam (who also designed the original hotel at Schiphol Airport for CitizenM), Tom Dixon (who also designed all the "Mega Rockstar suites"), and Softroom.

As you would expect of a ship this size there are both interior cabins (insiders as per the jargon) or suites with titles such as MegaRock Star with a large balcony and hot tub.

For a four-night cruise from Miami starting prices range from $1,600 to $7,895, but that’s per cabin.  Scarlet Lady leaves Miami 19:00 and is at Bimini (Bahamas), a private beach club, early enough to give a full day enjoying yourself with what’s called see-through water and plus snow-white beaches.  Next morning it is an 09:30 arrival in Havana, leaving the following day at 13:00 to give a taste of a sea cruise.  For those with energy there is plenty of time to bike the unexplored streets and savour a mojito at the local bars after the sun sets.

She docks at Miami 06:30 the final morning, but if you want a back-to-back booking the next cruise is a five-nighter to Costa Maya, with a sea day either side of the Mexican visit, and again a visit to The Beach Club.  Costa Maya is very much on the Caribbean cruise circuit, the port designed to resemble a blissful modern tropical village. There is Mahahual, a small fishing port to visit, one can explore the Mayan Ruins at Chacchoben or tour the Spanish Fortress at Bacalar.

For the introductory season another five-night cruise is to Puerto Plata in the Dominican Republic, again with two sea days.  The city is best known for its beaches. Playa Dorada’s lengthy beachfront is backed by resorts and an 18-hole golf course. The city’s old colonial-era centre is dominated by the 16th-century Fortaleza San Felipe, a Spanish fortress that now houses historical and military artefacts.

Virgin Voyages offer unlimited wi-fi, the basic bevies as noted, tips are included and there are no dining cover charges.  Virgin Atlantic flies to Miami on a daily basis and Virgin Holidays offer all sorts of packages (in sterling).  Local taxes and port charges are not included but will probably be on the initial statement.  It is normally a nominal amount.

Virgin Voyages is a unique and interesting concept aimed at US millennials with money to spend.  How British traditional cruisers react remains to be seen.  By the time the second ship joins the fleet in 2021 the investors will know if their millions have been wisely spent.  One thing for sure, the Virgin brand is certainly a winner.