With the IATA AGM starting at Seoul, Korea next Saturday it seemed a good opportunity for Rob Gurney, CEO of oneworld, to reflect on the 20th anniversary of the global alliance’s launch.  Gurney joined oneworld in 2016 from Emirates, where he served as senior vice-president commercial operations for the Americas for a short period.  The majority of his 25-year career in the industry has been with oneworld founding members British Airways and Qantas. 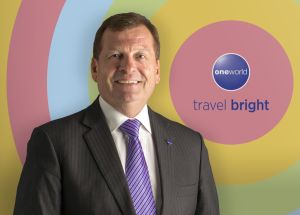 “With an initial five airlines, oneworld has grown today to 13 full members, with more in the wings.

At the same time, the airline business has changed fundamentally.  So has consumer behaviour.

The Gulf Big 3 and the Big 3 Chinese Mainland carriers have landed.

Low-cost carriers have come into their own, and the digital era has arrived with Silicon Valley trying to rewrite the travel rulebook.  Some airlines have changed their business models and unbundled some fares in response.

Cost containment has become the mantra.

Many of oneworld’s member airlines have undergone comprehensive restructuring – sometimes more than once – and taken complexity out of our business.

Some have merged – British Airways with Iberia to create IAG, American first with TWA and more recently with US Airways, LAN with TAM to form LATAM.

Other forms of airline cooperation have emerged.

Yet, while their membership has grown, let’s be frank, global alliances have not kept pace with this huge rate of change.

Until now, as far as oneworld is concerned.

As we turn 20, we are, effectively, relaunching our alliance, with a radical transformation designed to build on oneworld’s relevance to all its key stakeholder groups, with exciting initiatives across the areas of:

While oneworld has the best line-up in the skies, offering the most attractive network for our core target customer base, there are a few regions where we would like to strengthen further our collective offering.

This led to us signing recently our first new recruit in six years and our first full member from Africa – Royal Air Maroc.

We have also introduced the alliance’s first ever new membership platform, oneworld connect, which is aimed at carriers who can add value for us but who do not fit the traditional definition of a candidate for membership.

The first airline to commit to the programme – Fiji Airways – is already flying in this capacity with discussions progressing with other airlines interested in following suit.

oneworld’s core customer proposition is to make connections across all member airlines as seamless as possible.

We are now bringing this capability to life in the digital era with a revolutionary platform that will, when it is fully rolled out, enable customers to use their preferred oneworld member airline’s app or website to check-in and receive boarding passes for connections on any oneworld member airline, obtain information and updates on those flights, track their baggage, pay for extra baggage or special seats and a great deal more.

All this, no matter on which oneworld airline you are flying – with no additional app to download.   No more log-in credentials required.  The entire oneworld network covered.

We expect to be the first global alliance to deliver this level of convenience across all member airlines.

As for airports, oneworld today offers more than 650 lounges worldwide, with many often named among the best in the industry.  All are currently owned and operated by our member airlines individually or by third-parties on their behalf.

But now our member airlines have recognised that, by collaborating, it may be feasible at some locations for them to up their game, with bigger and better facilities than they could provide individually.

We have a shortlist of airports around the world for the first oneworld-developed, managed and branded lounge and expect to announce the debut location soon.

We are also working on once-in-a-lifetime projects to bring our member airlines under one roof at some of our most important hubs, including London Heathrow and São Paulo, and at other big airports, like Beijing and Frankfurt.

In the commercial arena, quite apart from the US$ 5.5 billion in interline revenue generated within the alliance, oneworld also earns more than US$ 1 billion a year for our member airlines through corporate contracts with dozens of the best known multinationals worldwide – businesses with global travel needs who prefer a single alliance contract rather than multiple agreements with multiple individual airlines.

We’ve revolutionised the way we process these deals, so we can move faster and more effectively – and the market in turn has responded very positively, with revenues up 10% since we started trialling this new approach.

To showcase the new oneworld, we are unveiling an invigoratingly fresh brand positioning – complete with our new tagline “Travel Bright”.

We want oneworld to be seen as a different kind of alliance, offering smart benefits and smart technology while demonstrating a human side – warm, intelligent, progressive and optimist.

oneworld’s transformation does not stop here.  The alliance will continue to evolve and innovate to ensure the alliance continues to deliver value for customers and for airlines as it flies into its third decade and beyond”.