When it comes to car names, SEAT seems to have settled on Spanish municipalities for the title of each of its product range. It manufactures the Ateca, Ibiza and Tarraco and now the Arona, named for a lesser-known Tenerife suburb. But it has a nice ring about it. 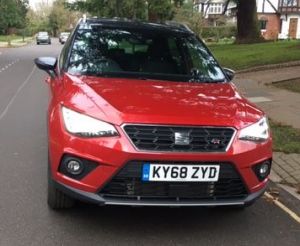 We are not sure if there is competition for the names and clearly a SEAT Barcelona or SEAT Madrid would be too much. Arona is now better known. In any event, SEAT these days is part of the VW Group and whatever it produces would have been assembled from the Wolfsburg parts bin with its vast assortment of car components.

At one time it was easy to choose a car. Each one usually came as a three-box assembly – engine, passenger accommodation and boot. If you wanted more luggage space and easy access, you bought a shooting brake/estate car. And the choice was usually black (at one time the most popular) or white. Times have changed.

Seen by the public at the Frankfurt Motor Show in September 2017, the Arona is a smart and contemporary sporty-looking mini SUV crossover hatchback.

But it is front wheel drive only, its virtue being that all on board sit higher than with the average saloon. It is a particularly well-put-together and sorted-out car, with the roof available in a choice of three body-contrasting colours. This makes for an astonishing total of 68 possible combinations, which should distinguish your vehicle very easily as you search through a car park with the registration numbers initially obscured.

BTN has a view that loan cars should be at the top of the range. The trouble is we are well down the pecking order when it comes to test vehicles and cannot demand a car to an exact specification, which would be the case for the public when ordering from new. A request for an automatic or manual is looked at seriously by the press team, but that is as far as it goes. For Autocar and the like, they need to cover the full range offered, often starting lower down the range, as in the case of the car supplied here. 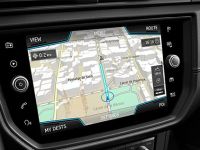 This is a roundabout way of saying we very much liked the petrol Arona 1.0 TSI FR 115 PS but it lacked torque and needed a heavy right foot, not good for fuel consumption, with mid-40s being the norm. If you are going for a manual Arona, try the 1.5 FR Sport. A quick dealer drive showed it to be a leader of the pack for £1,000 more.

The FR came very complete and there is a touchscreen system which links to your iPhone if you want, a DAB radio, Bluetooth, cruise control, alloy wheels and auto emergency brakes. The navigation system is connected to a simple heads-up display which makes for safer driving, and cruise control is fitted. Automatic climate control is independent for driver and front seat passenger and there are electrically operated side mirrors which work in well with the keyless entry system. You also get a wireless phone charging pad. 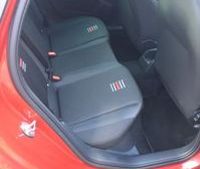 What caught the eye was the windscreen setting, more upright than normal, which together with the slightly higher sitting position made for an easy drive. For one long run, we were accompanied by a 6ft-plus front-seat passenger who had no complaints regarding headroom, and neither did the couple in the back. A third person in the back might have caused some problems, and also with motorway cruising the one-litre engine is somewhat pressed.

Driving the Arona feels smooth and comfortable, its suspension absorbing a good amount of bumps and potholes with the 18in wheels. As BTN has often said, the average road surface in the UK is deteriorating badly and a sensible choice of size can make a big difference to the pleasure of motoring. Overall, the SEAT Arona is safe, comfortable and spacious. SEAT has got it right.

Boot space is impressive and there is a height-adjustable floor to help with awkward loads. You can also hide small items underneath with a flap that comes up.

For reasons of its own, SEAT does not fit a reversing camera in the car, and has come up with a safety bleeping system which is visible on the screen but in our opinion not as good as a rear view would be on the excellent 8in monitor. However, to its credit it works on all four quarters, even with pedestrians. 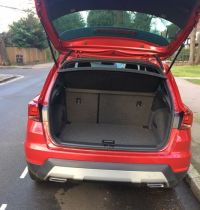 The Spanish branch of the VW empire has its own way of doing things and there are no optional extras. Certain engines are limited to certain trim levels. There are eight, in fact, in three distinct branches – SE, FR and Xcellence.

Citroën C3 Aircross, MG ZS, Vauxhall Crossland X, Kia Stonic and Hyundai Kona are all in the mini-SUV arena and might be worthwhile looking at, with some great deals available at the present time.

The SEAT Arona is a likeable small crossover slightly more upmarket than the Renault Captur or a Nissan Juke and worth the extra money. But go for the bigger engine car. You will enjoy it more.

SEE IN THIS ISSUE ALSO HERTZ