After being universally accepted as one of the best aviation ministers in recent times Baroness (Lizz) Sugg has become Parliamentary Under-Secretary of State for International Development. 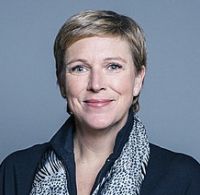 She is replaced by Baroness Vere of Norbiton, who was the Conservative candidate in the constituency of Brighton Pavilion at the 2010 general election. She finished third with 23.7% of the vote.  Under David Cameron she served as executive director of 'Conservatives In', an unsuccessful campaign supporting a remain vote in the 2016 European Union membership referendum.  She was nominated for a life peerage in the 2016 Prime Minister's Resignation Honours list. She is also responsible for transport security.

In another piece of late news the Caledonian Sleeper started her inaugural run to Kings Cross Sunday evening (28 April). The Department for Transport has announced a £50m backing. See BTN 22 April.