Trendy Copenhagen serves up a smorgasbord of experiences for BTN editor Richard Cawthorne. 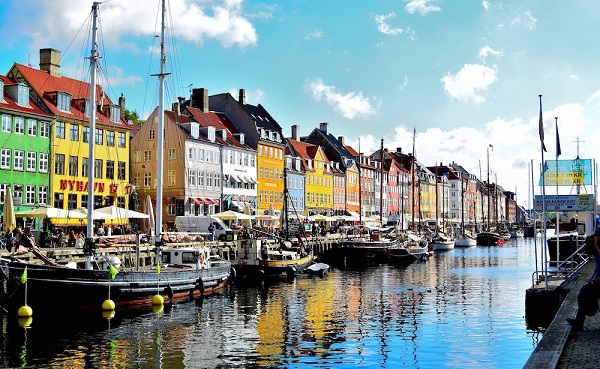 Nyhavn, referred to throughout our tour of Copenhagen as New Haven possibly in deference to the Brits on board, is at the heart of this city’s visitor industry and responds with colourful buildings and tall ships along its waterfront. The former industrial harbour changed character long ago, became home to a certain Hans Christian Andersen, and has never looked back. It is picturesque and some good cafés and restaurants can be found there, notably the Nyhavns Kroen, recommended for lunch despite looking a bit of a tourist trap.

Delivered into Kastrup Airport by British Airways Airbus A320 in around 2hr and armed with the Copenhagen Card, BTN arrived at Nyhavn aboard the Red Buses’ Hop-on Hop-off Tour, such vehicles being a favourite way to orientate yourself in a new city or one you have not visited for some time. Nyhavn is about halfway along the route, which begins opposite Copenhagen’s central rail station. It takes in, among other sights, Denmark’s national museum, the Copenhagen Mall, the formerly “independent” enclave at Christianshavn, the Danish Parliament and Jewish Museum before arriving at the halfway point.

The Copenhagen Card, available in a single- or multi-day format, gives free admission to most of the attractions as well as the Red Buses tour, all public transport including to and from the airport, and waterway cruises offered by Canal Tours Copenhagen.

Many passengers on the bus tour hop off at Nyhavn to join one of the cruises, which take in the city’s various and previously unknown to me harbours and waterways, all with a story to tell. Lasting about 1hr, the trip includes the Copenhagen Opera House, Amalienborg Palace, Christiansborg Palace, the impressive Black Diamond Library and – inevitably – the Little Mermaid, who is not as tiny as rumoured but merely life-sized.

Several of these attractions plus new sights feature in the second half of the bus tour, the difference being you can hop off the bus to explore them properly. Included are the Denmark Design Museum, Rosenborg Castle and the Crown Jewels, the Botanical Gardens and national art gallery, the Latin Quarter, City Hall Square and the nearby Strøget pedestrianised shopping street.

As was evident from the tours and sightseeing we did, Copenhagen is enjoying a visitor revival since being named Number 1 City in Lonely Planet’s Best in Travel 2019 listings. This was icing on the cake, as the tourist board’s successful “Hygge” campaign drawing attention to the friendliness of the Danish people was already commanding attention.

Helping things along and with recent events in London in mind, Copenhagen is known for its environmental policies and for having one of the most distinguished design cultures anywhere in the world. It’s a great walking city for visitors, while some 56% of Copenhageners who work or study here commute by bike every day. Denmark has invested at least €373m in cycle projects since 2009 and the country is a pioneer in promoting sustainability, including the Grundfos campaign emphasising the careful use of water.

This philosophy extended to the boutique Andersen Hotel where BTN stayed in Copenhagen. Close to the centre of things, it is in the trendy Vesterbro district of vintage shops and boutique stores showcasing Danish designers. Lonely Planet included Vesterbro in its list of 10 of the world's coolest neighbourhoods. The hotel’s bright reception area complete with open fire is a taste of things to come, with the warm welcome reinforced every day by a wine hour offering free drinks from 17:00–18:00 – more hygge in action.

On the eco front, the Andersen, with a comfortable 69 rooms and suites and one of two independent family hotels run by Karen Nedergaard, equips each room daily with fresh water in cartons, not bottles. Along with its sister property the Absalon, it has also just introduced “Concept Green”. This aims to reduce the impact on the environment by giving guests staying for more than one night an option to decline housekeeping and receive vouchers as a reward. Vouchers can be exchanged for drinks at the bar, bicycle hire or a 10% saving on a guided bike tour. 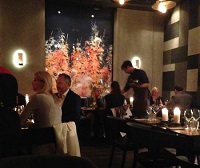 On the food front, BTN discovered the Danes like to eat well with the occasional eccentricity, to our eyes, of pots of lard (called lardo) served with many dishes. They can safely be left if you’re not in the mood. There is plenty of fish, especially herring in various forms, a slight emphasis on pork but otherwise mostly as expected.

We were recommended to Uformel in the city centre at Studiestræde 69 for its four-course tasting menu with wine pairing, a handy way of getting an introduction to the local fare. Copenhagen is not as expensive as rumour has it, but this was a special treat at £80 a person. Featured dishes were salted cod, tartar of Danish beef, guinea fowl and a lemon tart with ice cream, all good, politely and efficiently served and a genuine foodie experience.

We were also fortunate to discover right next to the Andersen another atmospheric restaurant, Frk. Barners Kaelder, which roughly translates as Mrs Barners’ Cellar and sums up things admirably. More good service and a starter of assorted herrings “according to the chef’s mood”. On the evening BTN attended, this meant marinated, curried, pickled and a special with dill, apple and aquavit. Main courses were various meat and fish dishes.

The one thing we missed was the Tivoli Gardens, right in the centre of Copenhagen, which opened for the season the week after we were there. Basically a giant fairground and very popular with the locals as well as visitors, it offers more than two dozen rides, live entertainment and more than 30 places in which to eat. Not to be missed, assuming you’re in town at the right times, though even out of season Copenhagen is definitely one for the must-do list. 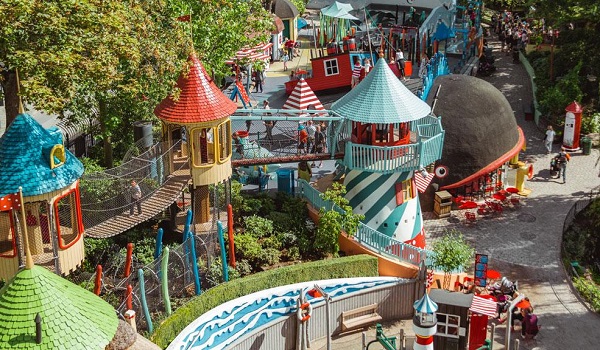