“Frustrating”. That was the term used by a senior manager in the consortium “poised” to take over Flybe last week. “Poised” in fact is the perfect word. “Ready” is another term that could be used.

Connect Airways Ltd, a joint-venture company split between Stobart Aviation (30%), Virgin Atlantic (30%) and Cyrus Capital (40%), is now funding Flybe but cannot take over management until the EU competition people in Brussels give clearance at some point in the summer.

In the meantime, the present Flybe administration must take the blame for the chaos that ensured last week when the airline cancelled more than 30 flights at short notice.

Did the airline try to bury the reduction of the winter programme by announcing it more or less at the same time as the termination of the Embraer 195 fleet? It was a PR disaster!

It should have been a glorious week for Flybe with the arrival of Heathrow service from Newquay and Guernsey, and shortly the Isle of Man, joining the established Aberdeen and Edinburgh routes. Flybe now serves more UK destinations than British Airways and backs up Heathrow’s stated policy to link London once again with the provinces (see www.btnews.co.uk/article/14438)

Add confusion to frustration and you have a recipe for uncertainty, never a good thing in aviation.

As one industry expert noted: “Flybe is in a period of limbo until EU gives the go-ahead with the takeover. There is a rebrand in the offing, possibly a third-time-lucky Virgin domestic.  Virgin CityJet failed at LCY and Little Red never really took off. The name Flybe is well established and memories are short. Perhaps the extension “A Virgin Atlantic Company” as a logo might work. It is certainly cheaper than a complete expensive rebrand. Virgin Connect is another possibility.”

Staff are pleased with the new backing, although many lost considerable money due to share ownership.

Established at the time when Jim French was CEO, the Flybe Training Academy at Exeter should be able to resolve the crewing problems that were claimed for the flight cancellations. It will be a useful addition for Virgin Atlantic with its own recruitment plans. Sister company Flybe Aviation Services has an MOD contract for engineering and maintenance of the A400M at Brize Norton.

The directors of Flybe Ltd are CEO Christine Ourmières-Widener, chief financial officer Ian Milne and a former CEO of Virgin North America, Jonathan Peachey, who was appointed by Cyrus Capital and joined the board upon completion of the sale of the business to Connect. Are they being “advised” by the new owners? It is a very curious and exceptional position. The backers of Connect have a wealth of experience in ‘low-cost’ operations. If anyone can sort out the mess, they can. And quietly in the background is Delta, a 49% owner of Virgin Atlantic, and Air France with 20% of the airline.

Wednesday’s statement said the airline was halting jet operations with effect from the start of the 2019-20 winter programme, with the last flights in October. It said the 78-seat Bombardier Q400 aircraft would be the backbone of Flybe’s network. Jet operations at Norwich are being halted, but services flown by Flybe's franchise partner, Eastern Airways, would continue.

With the stopping of jet services from Cardiff and Doncaster, Flybe said it would close both bases while continuing to offer flights to and from the airports with Q400s, with aircraft and crew operating from other bases. What happens to the remaining six Embraer 175s? It looks like they will continue at Birmingham and Manchester.

Distancing the two events of cancellations and closures, Ourmières-Widener said: “Our fleet reduction has always been core to improving our profitability. We are committed to assisting all our affected employees across the impacted Flybe bases.

"We remain fully committed to Exeter, Cardiff and Doncaster airports and will continue to offer a comprehensive choice of regional and European destinations operated by our 78-seat Bombardier Q400 aircraft." One has to ask the question: Were these her words, her PR advice-givers or those of Connect?

As BTN says, not the best of starts. We can only hope the new era will lead to greater things, for Flybe staff, its passengers and suppliers, and UK air travel.  This map shows the potential. 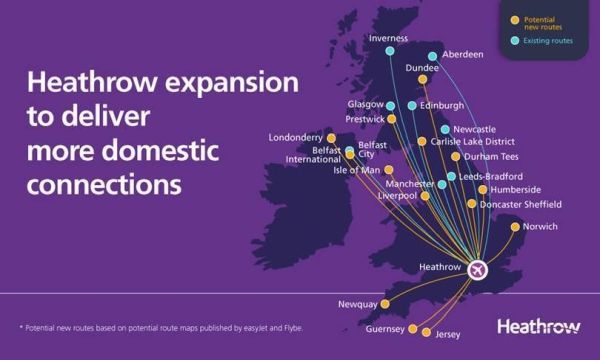