ON TOUR: EasyJet at the Aviation Club

Last Wednesday it was the turn of the head of arguably Britain’s largest airline in terms of passenger numbers to deliver the guest of honour speech at London’s Aviation Club. 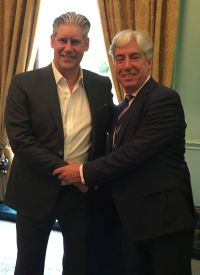 Johan Lundgren has held the post as easyJet’s CEO for 16 months, following the very successful reign of Carolyn McCall. Lundgren is a Swede with a strong travel-trade background.

It was a homily delivered at a good rate with, we were told, a deadline for departure from the Pall Mall venue. That was cast aside.

Clearly he was not in the mood to play second fiddle to competitors, and his was far from the abrasive style of others.


There were no new announcements. It was more of a State of the Union message, Lundgren noting that a target of 20% for women pilots should be reached in 2020. He also highlighted that the evolving technology partnership with Wright Electric continued. “I firmly believe it is when, not if, commercial electric aircraft come into operation."

He pointed out that the new A320/321 neos produce 15% less carbon emissions than previous-generation aircraft and that easyJet has been tracking its emissions per passenger kilometre since 2000. By last year, the airline had reduced these discharges by over 32%. The current target is a 10% reduction on the 2016 performance. "If we achieve this, it would be a 38% reduction on 2000.”

And the situation regarding unruly passengers who had been overdoing it when it comes to drinking in the terminal.

“We welcome the government’s Call for Evidence on the issue of alcohol licensing at airports and strongly believe it makes total sense to remove the exemption. This move could help us tackle this issue which unfortunately continues to grow and has an impact on our crew and other passengers.”

Lundgren took questions including from BTN, which wanted to know why easyJet had earlier in the week pulled out of a proposed takeover of Alitalia.

His answer was diplomatic, saying it did not meet the airline’s criteria, perhaps an euphemism for “second thoughts”. Who wants a bankrupt airline carrying baggage? EasyJet is already well into Italy and clearly the takeover did not make business sense.

On the question of Heathrow, he was far more cautious, agreeing that it was the only major airport in Europe that easyJet was not into. “It is something we are open-minded on,” he said. “I am aware that Heathrow (easyJet) visibility is lacking.”

With Flybe introducing two new routes at the end of the month, using the allegedly-unsuitable 76-seat Q400 turboprop, clearly it is a subject being discussed at Luton. Even if the A320 is considered too large at 180 seats, the A319, limited to 156 passengers, might make sense, it would seem.

Lundgren was much more positive when it came to where easyJet was going short-term, his background being with TUI, the holiday company. Several senior positions have been recently filled by ex-TUI staff.

“We see a significant opportunity to transform easyJet Holidays and become a major player in the leisure market, based on our existing network of destinations and frequencies, efficient low-cost operations, unique customer base and strength of brand”, he said.

“Currently there are 20m existing customers who fly to easyJet’s top 29 destinations by market share, of whom only 500,000 book a hotel through easyJet."