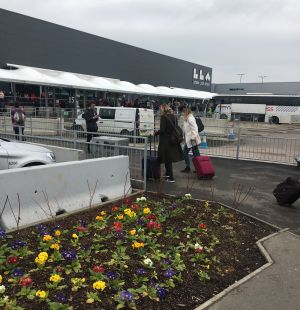 London Luton Airport is a conundrum expanding enormously in recent years and celebrating the completion of a £160m terminal transformation. It has been the home of easyJet since the airline was created in 1995.  However, Gatwick is now its largest base.

Luton is geographically situated in an ideal position passenger wise, with the M1 on one side, the A1 the other, and equally supported by the two major north-south railway lines, it could have been the capital’s major airport.  But for now it ranks fourth, trailing behind Heathrow (80m passengers), Gatwick (46m) and even poorly located Stansted (28m) when it comes to numbers.  (All 2018 figures).


It has a shorter runway (2162m) than the leading three, which limits the aircraft size it can take, but it also differs in being owned by the local Council, and operated by a foreign consortium.  It is Luton Council’s airport company London Luton Airport Ltd (LLAL) that is planning for the future towards 2050, not the current operator.


For many years easyJet (U2) has been the number one base airline at Luton but is being rapidly overtaken by Wizz (W6) in terms of seat offerings, also now a British airline (divisions of both U2 and W6 operate under UK CAA licences, and both the holding companies are listed on the London Stock Exchange).  Wizz likes to be called a Hungarian airline but its corporate headquarters are in Geneva.


In the mid-seventies the cockney actress Lorraine Chase promoted its virtues. Great ad for Campari but BTN is not sure it was so good for the airport. It has never been able shake off that image.

Today Luton has probably the easiest to use and nicest London terminal once you are past the front door.  The landside combined arrivals and departure area is huge and there are desks a-plenty for those who need to check-in.  The large security zone is at ground level with 16 channels and you can purchase a fast-track ticket (£4 pre booked or £6 at the airport). Up the escalators and the shopping area is not overbearing, comprehensive, and can be quickly passed through if in a rush.

If you are in a spending mood and don’t want to take your items with you simply make your purchases at Aelia in the Departure Lounge and collect on your return at the new Aelia Arrivals shop located after baggage reclaim.

The Luton Airport Swissport executive lounge is easily the best that brand offers in the UK.  It needs to be good as Number One Lounge is opening a facility in July by Gate 17, very conveniently placed at the far end of the main departure lounge.  Nearby is the Hawker Lounge, with an external area and viewing spot.  It’s very popular but why the name Hawker?  No connection with Luton.  De Havilland was down the road and another long gone aircraft builder, Percival actually on the site.

There are no air-bridges at Luton Airport, and the furthest gate is about five minutes’ walk from the lounge.  An effort has been made to brighten up the corridors but they still somehow seem to be of a utility nature.  Rather like a number of airports the growth of the A320 series/Boeing 737 from 150 passengers towards to 240 has caught Luton out and waiting on the stairways before boarding has become the norm.  A gate area increase might be the solution to the problem.

Under construction is the state-of-the-art £225m Luton Dart (Direct Air-Rail Transit), linking the terminal to the Parkway rail station and Thameslink.  The fastest train to London is 21min and the journey on the airport’s people mover terminal is around 3min.  There will be four carriages per train carrying up to 170 people.  Passengers from London will have to cross above the rail line in order to pick up the cable driven units, which is not dissimilar to the one at Gatwick.  Completion has been targeted for 2021.

For travellers arriving by public transport, or dropping off and using the midterm and long-stay car parks, access to the terminal by bus is simple and mostly under cover.  The frequency is just about adequate.

By taxi Addison Lee has the concession which is a de facto monopoly and is also close to the terminal building.  Private car and hire vehicles have to deposit their passengers on the ground floor of a new multi-storey car park the other side of the DART complex. And here the problems begin.  It is quite a long uphill walk, 150m from this point to the actual building entrance, a notorious windswept area with minimum cover. How are elderly people, with their luggage going to deal with the problem?  Will Luton Airport offer a courtesy porter service, or even a cheap concierge?  The trolley situation needs sorting out.  Perhaps a motorised guided system, either free or for a nominal fee.

A question mark hovers over the shelters for people wanting a rest or waiting for assistance to arrive.  They are very narrow and on a windy rainy day will not fully protect users from the elements. 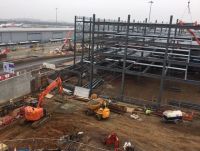 Regulars to the airport would have noted the bridge from the new multi-storey car park, which lacks a moving pavement and comes to a sudden end, forcing users to use the lift to the ground floor and then crossing to the uphill walkway.

Clearly it is not possible to join the car park to the first floor shopping area of the main terminal due to security issues, but why not a covered way and a moving staircase to the ground floor of the building?  This access problem needs careful attention by the new airport director. Perhaps somehow even more emphasis should be made towards improving the mid-term coach facility interchange which is not easy for those with disabilities. Health and Safety needs to take a careful look.

If the problems can be sorted out by the opening of the DART link “Which?” will have to start looking for another airport to put at the bottom of its ratings.

London Luton Airport is on its way, but is not there yet!

Yes, I find Luton Airport very convenient but what puts me off is the lack of adequate shelter from dropoff/pickup and coaches to/from the terminal entrance/exit. More frustrating is the number of steps and crowds at the boarding gates; equally so on arrival having to log carry-ons up stairs. So inadequate in this day and age. But despite all the welcome development this aspect has been overlooked for years!!