The 2019 edition of the Propliner Annual will be published on Monday 15 April.

The eagerly-awaited book is this year extended to 144 pages with 20 feature articles illustrated with more than 300 photographs.

Two aircraft familiar at one time in British skies, but still flying, are in the book and take pride of place in our short preliminary review.

Regulars at Coventry Airport will recall the Lockheed Electra fleet flown by Atlantic Cargo Airlines. Seen in the image is the 1961-built former G-LOFE, which saw UK service from 1982 until 2013 when it crossed the Atlantic, gained a new registration and had what is probably the cheapest makeover of all time. BTN editor-in-chief Malcolm Ginsberg has flown on this aircraft and also a Varig passenger version.

The Buffalo story is written by Electra skipper Tony Jarvis, who has been flying Hercules and Electras in northern Canada for more than 30 years.

With British Airways keen to promote the airlines that helped to create the UK flag carrier in 1974 (don’t forget the 45th anniversary of BA is 1 April 2019 – BTN will be commemorating the event), the Erickson Douglas DC-7 is still being flown in Oregon as an aerial fire tanker. BOAC operated 10 of the type from 1956 to 1965. 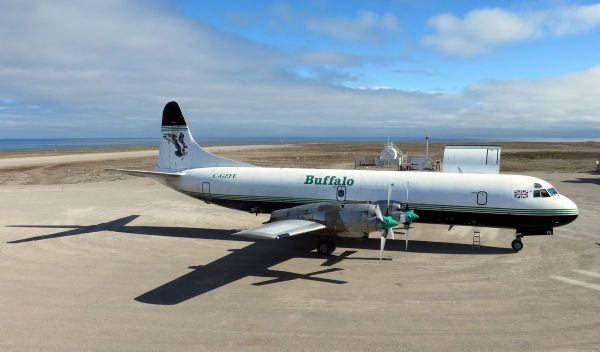