Just over 15 months ago the Kia Stinger arrived in the UK with an astonishing display at Newquay – Cornwall Airport (NQY).  Flybe’s Q400s had to clear the runway for a five-seater saloon out to prove it was quicker than the Bombardier prior to getting airborne, and with far greater acceleration than the Canadian turboprop.  150mph top speed and 0-60mph in 4.7sec was recorded. 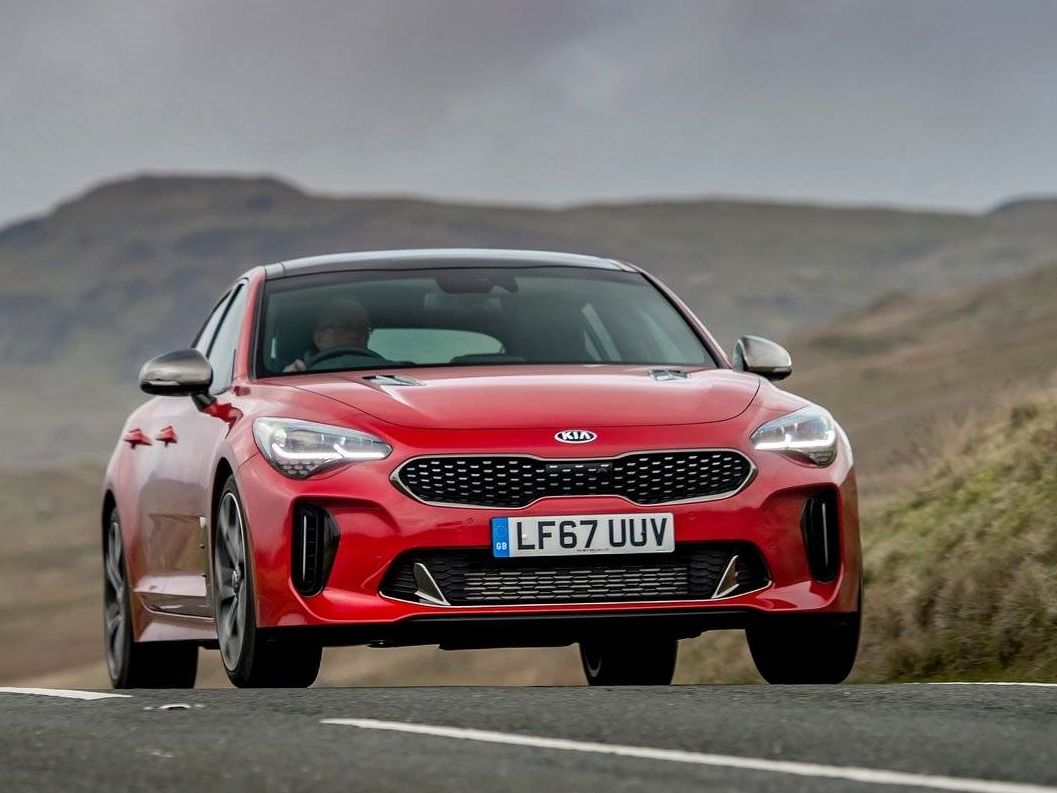 Go back 20 years and hardly anyone in the UK had heard of Kia.  Today there are 189 dealers nationwide selling a range of 18 models.  All Kia models come with a seven-year warranty, or maximum 100,000 miles, which can be passed on to a new owner.

Although assembled in Korea the car was designed at the Frankfurt studio taking six years to evolve.  It is Kia’s first front-engined rear-wheel drive car and comes with a limited slip differential.  It feels and looks like a quality product.

The Stinger is smart looking, even rakish, but the sharp line means limited headroom for really tall people.

Kia describes the Stinger as a gran turismo which perhaps is pushing the portrayal somewhat, but it is definitely a fine mid-size family business car, a sleek motor featuring most of the ‘toys’ required in its market sector.  It comes very comprehensively equipped.  No need for extras.

Don’t be put off by the term T-GDI.  This in fact means Turbocharged Gasoline Direct Injection), or petrol driven, giving in our hands something less than 35mpg, a good figure for a car hard driven by BTN, mostly in town.  Kia’s engine stop/start system ensures no fuel is wasted or emissions transmitted when stationary.  The engine cuts out when the driver brakes to a standstill and restarts as the brake pedal is released.  This action is very smooth and also includes a hill start facility.  Reckon on 45mpg for a trip mostly on motorways.

Safety is something Kia is very big into, with the standard package including Keep Lane Assist, Rear Cross Traffic Alert and an Active Bonnet, all of which are self-explanatory. Kia has fitted the TomTom navigation system across the range using an 8” touchscreen including live traffic updates, speed cameras, points of interest and weather reports.  A head-up display is also a safety feature allowing the driver to concentrate on the road ahead.  This one is displayed on the windscreen and is customisable.  You see what you want to see.   A reversing camera comes fitted as standard.

Also part of the safety aspects of the car is an electronic stability control system to control potential skids without driver intervention.  Called Vehicle Stability Management (VSM) it incorporates a new dynamic vectoring system which monitors the drivers input and also the road conditions and automatically applies power and braking force to the rear wheels to minimise understeer and enhance tractability and handling.

Stinger’s brakes have had more development work on those of any previous Kia to ensure they are up to the performance of the engine with ventilated discs on all four wheels.

The doors are wide.  Tall drivers need to be careful getting into the low-slung seats but once in they are snug.  The front seats offer an eight-way adjustment.  The memory for the driver only!  The steering wheel is heated, as are all the seats, except for the back centre position, which also has the transmission tunnel to contend with.

Cruising at the legal limit was quietness personified and a very smooth eight-speed auto box is well suited to the performance.  The sporty nature of the Stinger means it gains steering wheel mounted paddles.  The car’s performance can be customised through the Drive Mode Selector which offers five programmable settings.

The Stinger is the first Kia to be fitted with an Active Sound System.  This relays the engine note to the cabin through the car’s audio system rather than the more conventional actuator.

There are front and rear USB ports and a wireless phone charger.  Our car had a superb nine-speaker audio system with a front under-seat subwoofer.

The boot offers 406 litres but the rear seats can go flat, more than doubling the space to 1,114 litres.

Strange how the car market has changed.  SUVs are all the rage at present.  Kia has come in with something more traditional.  Perhaps gran turismo is the right description.

Competition abounds.  For saloons only we should mention the Jaguar XE, BMW 3-series, Mercedes-Benz C-Class and Lexus IS.  They all start at a higher price.