AND FINALLY: Also not forgotten

The Glory Years – A book review. 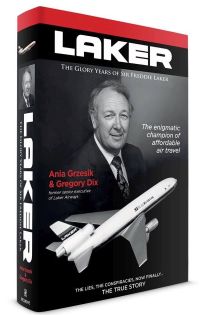 For many involved in the current commercial airline scene, the name Sir Freddie Laker means little, but he was the man who introduced ‘low-cost long-haul’.

Whether its current protagonist, Norwegian Air, follows Laker Airways into a premature demise remains to be seen, but the parallels are obvious. Taking on the ‘big boys’ is not easy.

Freddie Laker – The Glory Years is a hardcover, 608-page biography with three 16-page galleries and more than 300 images about the remarkable life of Sir Freddie.

Having borrowed £38,000 from a wealthy friend to top up his own savings of £4,500, he went into business as a war-surplus aircraft dealer. He supplied aircraft for the Berlin Airlift, designed to defeat the Soviet blockade of West Berlin in 1948-49, which allowed his business to flourish. Laker often flew the aircraft himself.

By 1954, his Channel Air Bridge was flying cars and their owners in Bristol Freighters from Southend Airport to Calais. Laker developed the Douglas DC4-based Carvair.  As managing director of British United, he helped to develop the BAC One-Eleven, in its time Britain’s most successful commercial aircraft.

He went on to form Laker Airways and the Skytrain transatlantic service, which flew for 16 years until its demise in February 1982 and is best remembered for operating the Douglas DC10, one of the first wide-bodies.

The book is co-authored by Gregory Dix, ex-Monarch, Gatwick Handling and Laker Airways, with Ania Grzesik.