ON TOUR – CONFEX - Conferences and Exhibitions 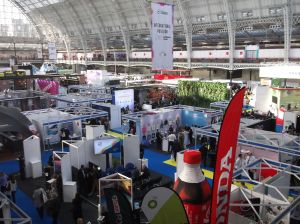 International CONFEX falls between Business Travel Show and the Meeting Show – both literally and figuratively.  It took place again on 25 and 26 February in Olympia Grand in conjunction with the PA Show (formerly Office Show) in the balcony and Events Production in the adjoining National Gallery.

This means that there is a certain amount of overlap – for example, some hotels chains attend them all, and so does PA Life magazine because personal assistants handle meetings as much as travel.  There are also inconsistencies such as that, some combined travel management and event companies go to Business Travel but not CONFEX.

The latter always has turnover among exhibitors, but this year still saw as many as 2018, of which half were either destinations, their conference venues or exhibition centres.

The guide divided exhibitors into 35 categories, although here again several had multiple entries, including one of the eight team-building specialists.

It could only be Spy Games (its clandestine location is suspected of being Milton Keynes) in the usual blaze of secrecy.  Do not repeat this, but it is rumoured that a famous billionaire is hiring it for a hush-hush event somewhere on the Riviera sometime soon.   Otherwise, the international side of CONFEX was thin, with only a couple of Continental venues plus Malta and Egypt represented.

The largest space was occupied by provincial hosts such as Belfast, Blackpool, Bournemouth, Brighton and Bristol as well as Welsh bidders for meetings.  One stand combined booths for half-a-dozen academic venues such as Edinburgh University, while Hampton Court Palace was among a few prestige sites.

Chelsea and Southampton football clubs were among some sports pavilions for hire, and Pontins Holiday Parks made its debut in corporate events.  Among the few venue-finders was Business Lead Connections Ltd whose Leon Evans told me, “CONFEX is useful for meeting existing clients and finding new ones”.  The value of networking was also shown by the presence of the Association of Association Executives, based in Hull, which boasts 24,000 members or subscribers worldwide.

Listed under accommodation were 29 exhibitors that ranged from Burley Manor to Jurys Inn, Oxford, but only Radisson and Germany’s H-Hotels were there as groups.  Two river cruise lines promoted meetings afloat, but there were no railways, while the only connection with aviation was iJET Airport Concierge and Birmingham Airport.  The NEC had a separate stand.  Other exhibitors with self-evident services ranged from Coach Logistics to Sandown Racecourse and from Conference Badges of Kingston to Silverstream TV which videoed the event.

Across at Event Production, this was all about the mechanics and requirements for staging both indoor and outdoor roadshows and entertainment – with a new emphasis on those at night.  About 120 exhibitors ranged from suppliers of catering and marquees to medical facilities and promotional merchandise.

Insurance was represented by Luker Rowe and Worldwide Risks.  Highlighting the increased threat to any gathering was the presence of such firms as Security Nation Ltd and Drone Seekers, based in Southampton and Romsey respectively.  And sniffer-dogs roamed Olympia as usual.

The two days saw continuous lectures and debates in no less than seven theatres, but they overwhelmingly covered the techniques, technicalities and technology for arranging meetings and staging events.  The only one about travelling discussed the Global meetings and events forecast from American Express which had interviewed 700 buyers and 30 experts worldwide.  It concluded that attendance was up, but budgets were not keeping pace, besides which airlines and hotels were about to charge more.

What CONFEX failed to publicise were two other relevant surveys.  The one commissioned by Ukinbound concluded in December that 59% of members were upbeat about business in the current year.  At the highest rate since October 2017, the increased confidence stemmed from an influx of forward bookings, the value of the pound, and greater interest from North America and Asia.

Moreover, four out of five respondents reported that bookings or visitor numbers were either similar to those a year previously or else higher.  Meanwhile research by VisitBritain found that the 1¼ million meetings took place in 2017, and that the entire conference sector is worth more than £18 million.

Nor were CONFEX figures for exhibitors and visitors available, simply because this is the only show I have ever attended where there was no spokesman, let alone a media lounge complete with news releases from the organiser and various exhibitors.  Worse, the feedback from some exhibitors is that the triple trade fair is making a mistake by moving to ExCel in 2020.