Development company CapitaLand has topped out the eighth and final skyscraper of Raffles City Chongqing (China) as preparations begin to open the highly anticipated 1.12million sq m megastructure in the second half of this year. 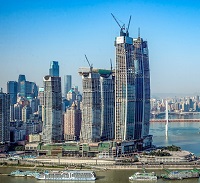 The topping-out follows the structural completion of the development’s 250m high skybridge, The Crystal (below), the world’ highest, which links six of the towers

The development is at the confluence of the Yangtze and Jialing rivers in Yuzhong District, at the nexus of three Central Business Districts – Jiefangbei, Jiangbeizui and Danzishi.

Of the eight skyscrapers, two are 350m supertall towers, Chongqing’s tallest buildings, and one also holds the title of China’s tallest residential tower. The other six skyscrapers are about 250m each.

Known as Raffles City Chongqing’s “ninth horizontal skyscraper”, The Crystal is an enclosed skybridge nestled above four of the 250m towers and links two adjacent skyscrapers by cantilevered bridges. At 300m long, 32.5m wide and 25.5m tall, it is the world’s highest skybridge linking the most number of towers.

The whole development was designed by architect Moshe Safdie to reflect Chongqing’s past as a trading centre.

For a video of the construction, see www.youtube.com/watch?v=mUrLV4IS97Q 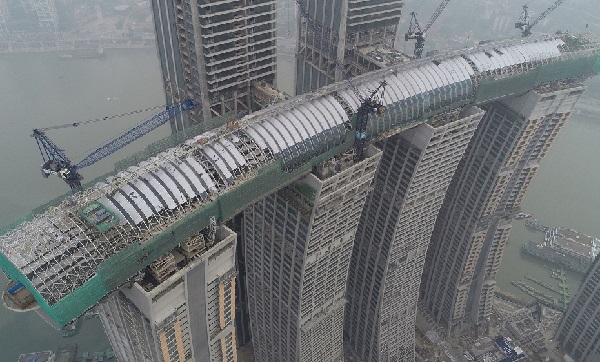