As Concorde celebrates the 50th anniversary of its first flight, plans for a special display by the Science Museum in London have been thwarted by British Airways turning down a plea for support and a wider partnership. (See also BTN 28 January and also 11 February)

The maiden rotation of Concorde took place from Toulouse on 2 March 1969 with André Turcat at the controls. The first UK-built Concorde flew from Filton to RAF Fairford a month later on 9 April, piloted by Brian Trubshaw.

While not the largest aeronautical exhibition, London’s Science Museum in Kensington is considered to have one of the world’s greatest aviation collections and the home from 1925 until 1948 of the Wright Flyer.

With BA failing to help with a special short-term exhibition the museum plans to offer a blog on one of the most innovative Anglo-French initiatives. In another move KLM, the world's oldest airline, is thought to be planning celebrations to celebrate its 100th anniversary, having been founded on 7 October 1919. Its first flight, with a de Havilland bi-plane, took place from Croydon Airport London to Amsterdam on 17 May 1920.

Level 3 of the Science Museum is devoted to aviation, the exhibits including a Lilienthal pioneer glider from the 1890s, a Supermarine S.6B of 1931, forerunner of the Spitfire, and a Douglas DC3, still the world's most prevalent transport aircraft, with 15,000 built. 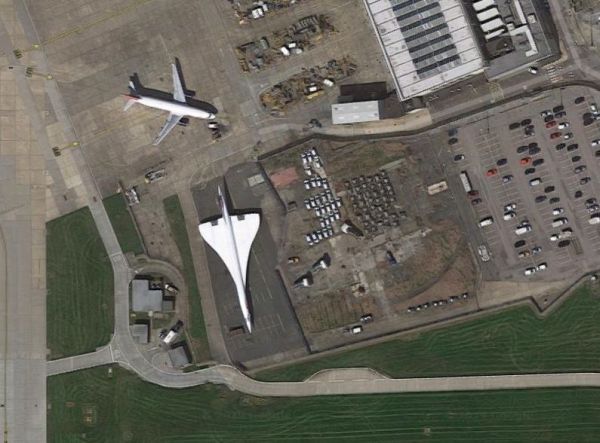 Mr. William Tahil has it wrong that Concorde is the only supersonic commercial transport (SST) to have flown. The Russian Tupolev TU-144 is (was) the second one. The TU-144 had at least three 'firsts'. Being the first SST in the air (on 31 December 1968) and flying both with Mach 1 and Mach 2 (once and twice the speed of sound). The first commercial flight of the TU-144 was on 26 December 1976 from Moskou to Almaty in Kazachstan (with only freight). The first commercial scheduled flight with passengers on the 'Concordski' took place on the same route on 1 November 1977. This service lasted only for about 51 return flights until early June 1978.

Mr Carrivick has got his facts wrong. British Airways is not 1000 years old! 'False News' seems to be the in thing. Nobody is taken in by this nonsense thought up by some PR person.

Come on Brooklands, what are you waiting for? Concorde's 50th is surely a golden opportunity for you especially as a good quarter of the a/c was built on your site!

Another forgotten Concorde is G-BOAE, the one next to Bridgetown Airport (Barbados). The 'experience' appears to be permanently closed, with very little information available. Neither our hostess on the island nor any of the taxi drivers knew that the museum is closed.

Concorde's 50th anniversary is of global stature. Coming in the same year that BA celebrates it's centenary, it's right and proper that a definitive and agreeable future for this 'orphan' aircraft was found. Shoving it around the LHR base, where space is at a premium anyway is like kicking a can down the road, so please sort it!

Concorde is no ordinary aeroplane - it is the only supersonic commercial transport to have flown and we have regressed terribly in no longer having access to the speed of international supersonic air transport. Juan Trippe famously said the future of the world was a race between the atom bomb and the jetliner– fortunately the jet airplane and the vision of the world that Concorde embodies prevailed or we would not be here. Concorde was an example of what Franco-British cooperation can achieve and led directly to the founding of Airbus – values of cooperation between the human beings living in different European countries which are again under existential threat today which those of a “Brexit” mentality – ironically the older generation - could do well with being reminded of. Of all people historians should be aware of the need to remind people of real history so that we may not repeat it but progress.

Regarding the above comments, it hasn't stopped BA 'redecorating' a few aircraft in BOAC/BEA colours for a 'spurious' centenary when the company only dates back to 1974 ! KLM is the only airline that can truly boast a centenary !!

As a historian I am among those who realise that we tend to sometimes to overdo the marking of anniversaries. There are limits -especially if they include money - and perhaps BA decided that supporting a first flight of a long out of service type was a step too far. I do not recall any great attention being given to the first flight of the Vickers Viscount or the DH Dragon, each in their way important events for BA and the world.