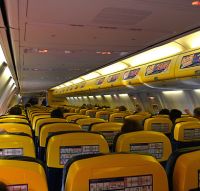 RYANAIR will shortly outline plans to reduce growth and capital expenditures "significantly" in the first quarter of the new year after negotiations with Boeing for an order of up to 200 new 737-800s formally broke down, although it still plans to take 112 previously ordered -800s (including 48 this year) to sustain growth over the medium term.  At an investors' briefing CEO Michael O'Leary said that he planned to distribute to shareholders in March 2013, that the €2.5bn cash mountain will grow and confirmed that a third bid for Aer Lingus was unlikely unless the Irish government disposed of its 25% holding.  He has not closed the door completely regarding Boeing and may yet order aircraft. www.ryanair.com