Traffic at Saarbrücken Airport in Germany is no longer being controlled from the site but from hundreds of km away in Leipzig using a remote tower control centre (RTCC),   below,  set up by German air navigation service provider DFS (Deutsche Flugsicherung).

A Luxair Bombardier DHC 8-400 from Luxembourg was the first aircraft to have its landing controlled from the Leipzig installation. A Bombardier CRJ 700 to Berlin from the same airline received take-off clearance 2min later.

Ten air traffic controllers work at the Leipzig centre after moving from Saarbrücken and monitor their former home even without a direct view from the tower using an advanced visual system installed at Saarbrücken.

Video and infrared cameras that can pan, tilt and zoom deliver a permanent 360deg view of the airport while other static cameras cover the apron, which DFS says allows the smallest detail to be seen.

The company also notes the infrared technology gives the controllers a much better view than before, especially during bad weather and at night. 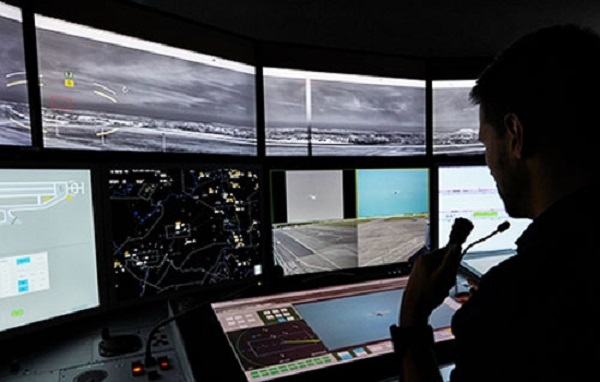