November saw the annual International Cruise Summit, this year held in Madrid and sponsored by Cruise News Group. BTN reports on the event and on what will become December's most important new ship introduction. 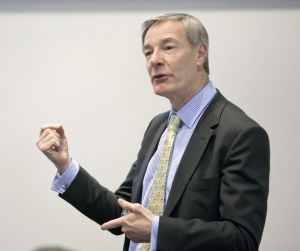 In a strong opening speech which set the tone for the whole event, David Dingle, UK chairman of Cruise Lines International Association (CLIA) firmly warned on strong and unnecessary fiscal policies at some destinations for the cruise industry, citing two recent examples where he believes a city, on one side, and a country on the other, are viewing passenger cruise vessels as “providers of an easy source of income for their city budgets.”

Mr Dingle, who also chairs Carnival Corporation UK explained his remarks: “Two weeks ago the city of Amsterdam decided to impose an €8 per head passenger tax on cruise ships staying in port 24 hours or less starting from 2019.” He went on: “With its 125,000 transit passengers a year if you times that by €8 each that roughly will bring in €1m which happens to neatly fill a hole the city has in its budget.” If ships were to stay longer than 24 hours then the new tax increases to €16 per passenger.

Gianluca Suprani, head of global port development and shore activities at MSC Cruises, confirmed that his company has taken the decision to withdraw calling in Amsterdam next year and instead will place those planned overnight calls in Rotterdam.

In a very instructive presentation, Esther Mallach, partner of the German environmental management company Arnecke Sibeth Dabelstein, explained how the cruise industry is far ahead and beyond environmental sustainable footprint compliance compared to other travel sectors. However, it is not communicated correctly, and much worse, the stereotype persists that cruises are large pollutants.  P&O’s Iona, set to debut in May 2020 typifies the way forward.  185,000 tons (the original Queen Mary, now berthed at Long Beach and getting on for 100 years old, is 83,000 tons) 5,200 passengers and 1,800 crew.  She is powered by liquefied natural gas with zero sulphur and nitrogen emissions and a significant reduction in carbon affluence.  Media briefings in the future will have to enter this area too and not just tell us about the wonderful shows and outstanding dining. 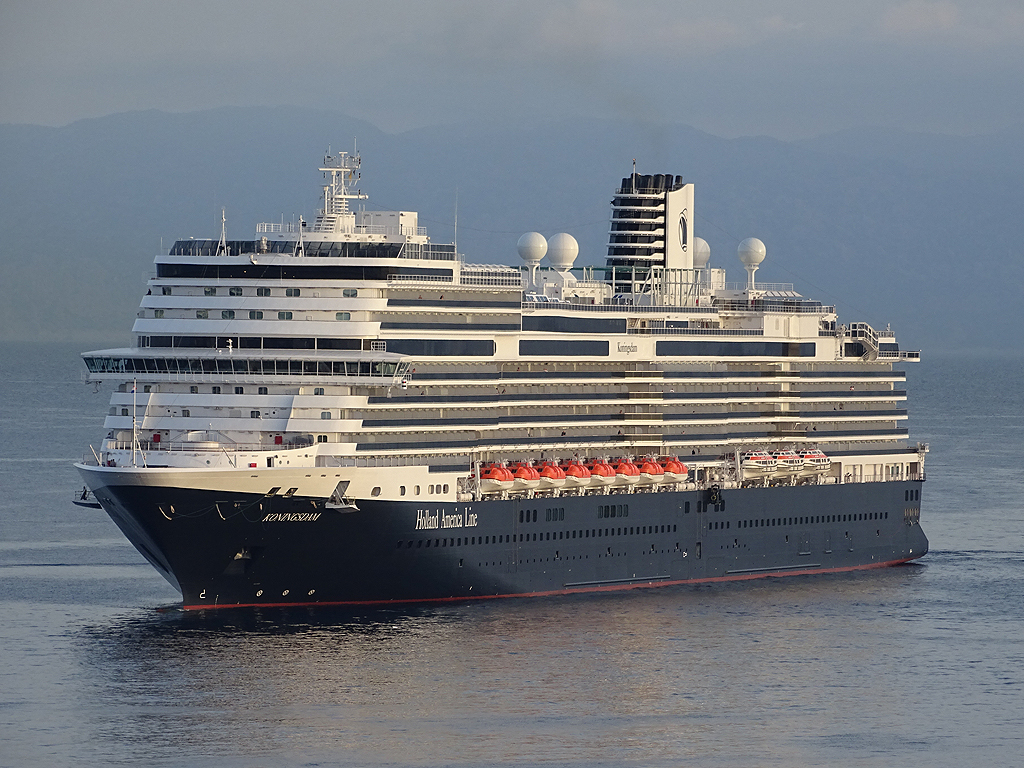 Let’s get the terminology out of the way first.  By any definition this was a maiden voyage. An armful of dictionaries, including the Oxford, Collins, Webster’s, even Wikipedia, define it variously as “the first voyage after shakedown”, “the first with paying passengers” or “the first for the ship’s intended use”, all of which have roughly the same meaning. Not good enough for the Holland America (HAL) publicists, who seem to have written their own dictionary. Accordingly, we travelled not on the “Maiden” but on the “Premiere” voyage, though nobody used that expression for the Titanic, which had a fundamentally similar trajectory though different final destination. For the HAL marketing department, the maiden voyage – if there is one – seems to be the first one leaving from a port in the United States. 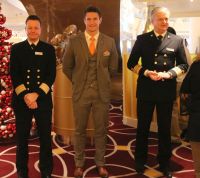 This slightly weird attitude had further ramifications. Most of the passengers we met had travelled, not only on sister ship Koningsdam, but also on every other ship in the Holland America fleet, not once but many times and to many destinations. Lots of these cruisers were veterans of 50 Holland America voyages and 80-plus cruises with the line were not especially unusual. Often they had booked more than a year ahead. Our own tally of five HAL cruises placed us firmly in the “beginner” class.  Some  of them are being toasted at various social gatherings and we have all received a generic HAL coaster with a company logo overprinted for the occasion plus a specially designed plate by a famous Dutch manufacturer commemorating the “Premiere” Voyage.

Such silliness aside, this is a great vessel with distinguished and well experienced officers, a worthy flagship for Holland America, taking over from the two-year-old Koningsdam, the only other so far in the Pinnacle class. We’re due to dock at Fort Lauderdale early on 19 December.

The Nieuw Statendam does its best to live up to its 5-star rating for luxury and all-round comfort. As befits a brand-new ship, the shiny new furniture is very comfortable and squeaky-clean, but there were strange noises coming from some of the doors and windows, where perhaps a screw or two needed re-tightening. Elsewhere the ship is like a travelling art gallery, with paintings, photographs, sculptures, collages and other works of every shape and size on staircases, in elevator lobbies and public rooms, and in any otherwise nook or cranny between. To achieve this, the company employed a cohort of established and up-and-coming artists and design specialists.

In an interesting talk to passengers, Holland America president Orlando Ashford emphasised (if my memory is correct) that all were for sale. Did that mean that wealthy passengers could haggle over prices, then walk off the ship carrying a favourite item, whilst the sold object was replaced by another from an unmarked storeroom? Another thing mentioned by Mr Ashford was that they had done away with the traditional ship’s library because losses due to passengers taking books home amounted to $2m a year (presumably from the whole fleet). Yet on this ship the excursion organisers had seemingly organised their own library of (mainly expensive) travel books near their information desk and elsewhere someone had organised a “book exchange” event for those who had brought books to donate.

The reason I can’t check that Orlando said those words about art sales is that HAL seem to have missed an important trick, or at least suffered an unannounced breakdown, where lectures and illustrated talks like his are concerned. On virtually every cruise ship with a modern TV system (Nieuw Statendam is certainly one of those) all such events are filmed or videoed, then rebroadcast on a dedicated TV channel for the duration of the cruise. This can even include certain entertainers (like jugglers) where copyright is not a problem. Many passengers with walking problems or who may simply have missed an excellent presentation look forward to these rebroadcasts, but on the Nieuw Statendam they faced disappointment. There was indeed a single channel called “Special Events,” but all it offered was the brief notice: “Not available at this time.”

Food in the no-surcharge restaurants is of a high standard, so good in fact that one wondered about the need for so many speciality venues. I even met Captain Sybe standing ín line for a snack at the New York Deli. Room service also deserves a mention, with high-quality food, fast delivery and freedom from surcharges except when very late (after midnight).

An important innovation is the provision of washbasins for passenger use inside the Lido self-service restaurant. Holland America is probably the first company to admit that the ubiquitous cruise-ship hand sanitizers – even those on our ship – are not quite efficient enough to avoid contamination in real situations. HAL provides eight of these basins in the restaurant area, where the user need touch nothing except the single-use paper towels. It was probably a mistake, however, to integrate them with serving stations, since at first glance one might think that they were there for crew rather than passengers, and the staff do indeed use them. More promotion and local signage seemed to be needed.

Assistant maitre d’ Hardy Kufniawan showed me around the kitchens. The largest is on deck 2, serving the main and upper floors of the Dining Room (capacities 700 and 500 respectively for each of two sittings), as well as the Lido, Room Service and nearby specialty restaurants. A subsidiary kitchen is located on deck 3, with crew lift connection. Since the total cabin accommodation is more than 2,600 (2,800 in school holidays), the ship relies on the excellent Lido self-service and premium restaurants to ensure a comfortable unrushed meal for all. 150 staff work in the kitchens and an equal number in the dining rooms. Hotel manager Don Abets had previously explained to me that, including these, he had 849 crewmen and women in his department. 14 managers reported directly to him, and there were 70 junior managers and supervisors.

One element Holland America might learn from a fellow Carnival subsidiary is in the posting on a large board of small coloured photographs, each depicting a meal available on the ship’s menus.  On Cunard’s Queens, this ancient system becomes TV monitors placed around the kitchen, where full-screen images can be summoned instantly at the touch of a proverbial button.

Where entertainment is concerned, the main attraction is the World Stage, a theatre-in-the-round with 800 seats (100 more than the Koningsdam) around three-quarters of the stage circumference and a similar wrap-around high-res series of digital screens covering every available inch and centimetre of wall space. In addition, a giant videoscreen-covered cylinder lowers from the ceiling for yet more striking visual effects. However, the on-board (or more likely on-shore) show producers are only just testing the capabilities of these electronic riches. A musical show by six well-trained acrobatic dancers became a must-see audience-immersed spectacular with amazing special effects, but only had two performances on a single day. A different show, again with only two performances, was promised for the following week, Apart from these, this theatre was just another area for lectures and musical performances, with a few conventional slides or video as backdrop. I envy those who will see the full potential of this space on future voyages.

Elsewhere there are a number of differently themed open-plan areas collectively named the Music Walk. One of them, dedicated to and by the Rolling Stones, was especially loud, a considerable problem for others in the vicinity. But the total complement of entertainers, whether comedy magician, international flautist, jazz band or chamber orchestra, was well up to standard. No Broadway, London West End or Las Vegas musicals were on offer, but it generally takes a jumbo-sized mega-cruiseliner to afford such lavishness. What we did find was typical HAL informality, remarkably friendly officers and crew, and a desire to assist at every opportunity. As Don Habets told me, “Every day we strive to do better.”

Ken Brookes will update readers in the February edition of CRUISE NEWS, and we plan to take a more in-depth review of Holland America later in 2019. 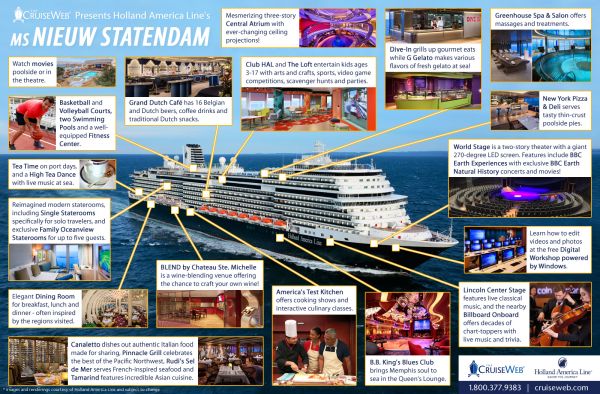 Dateline: somewhere in the South North Atlantic.  Most images and story  © Kenneth J. A. Brookes 2018.