Sea turtle from All Nippon

On the heels of Air Astana’s snow leopard livery (BTN last week), All Nippon Airways has seen its and Japan’s first  A380 roll out from the Airbus paintshop in Hamburg sporting an Hawaiian green sea turtle. 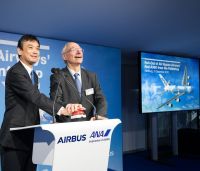 The creature, known as a Honu in the Hawaiian language, symbolises good luck and prosperity. Each of ANA’s three A380s, destined for the Tokyo Narita – Honolulu route, will feature liveries in different colours and with different designs.

The blue of the first, below, refers to Hawaii’s blue skies. The second aircraft, due next July, will be in green for Hawaii’s oceans and the third orange for the Hawaiian sunset.

ANA executive vice-president Yutaka Ito said: “The A380 will be an important addition to our fleet and will allow passengers to reach the islands of Hawaii in comfort and style. Customised liveries add a personal touch to make the trip more memorable.”

ANA is set to receive the first of the new A380s next March, with the inaugural flight from Narita scheduled to depart on 24 May. 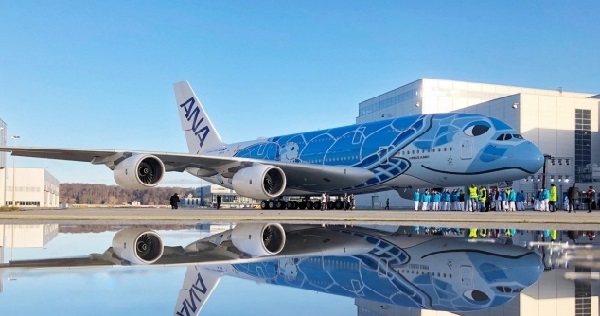