For the special end of year edition of  Business Travel News  we are into a motoring legend with a car that can trace its heritage back over 100 years, and a Brooklands ON TOUR, featuring the world’s first purpose-built motor racing track.

Aston Martin is British tradition coupled to perhaps the most exciting production car on the planet.  When you drive an Aston Martin DB11 envious bystanders do not try and discover who the pilot is.  In Skyfall Silver the car is the star!  Malcolm Ginsberg reports.

Motoring journalist Jeremy Clarkson summed it up. "If you're ever in Paris, at a party at 3am, and suddenly remember you are playing in a tennis tournament in Monte Carlo the next afternoon, this is the car for the job. You'd arrive feeling like you'd just got out of the bath”. It is a true grand tourer with plenty of room behind the front two seats and a reasonable sized boot. A pair of young children can sit in the rear in comfort.

A DB11 can reach 60mph in 3.7sec and on the Millbrook Proving Ground, Bedford, high-speed bowl it proved to be utterly stable at 120mph and clearly capable of rushing up to the 200mph official top speed.  For the get-away you can use the standard box, sports, or sports plus drive. Reckon to get 17.5mpg and 25/27mpg on a run. The fuel consumption is twice that of the legendary James Bond Sean Connery DB5, the Goldfinger car of 1964.  When you are paying around £190,000 with the add-ons does it matter? The fuel tank is good for only 250 miles.  And if you are of a certain age and don’t know what the DB is all about Aston Martin actually dates from 1913, and was owned in the immediate post WWII period by (Sir) David Brown, tractor magnate.

The test car in question came powered by a 5,204cc twin-turbocharged V12 engine producing 600hp through a rear-mounted 8-speed ZF automatic transmission.  The gear control looked suspiciously like the Jaguar rotary switcher and clearly with production running at 7,000 units a year Aston Martin needs to borrow certain parts from other quality manufacturers.  The sat nav is Mercedes Benz but the test car did not have a head up display, a ‘safety’ must these days.

The basic DB11 debuted at the Geneva Motor Show in March 2016 as a replacement to the DB9.  And if you want to know what happened to the next in numerical sequence, only 10 DB10s were ever built, eight used in the production of the 2015 film Spectre and one sold for £2.4m.  The DB11 is for the most part a production look-alike evolution built on an entirely new platform.

The DB11 was designed by Marek Reichman, Aston Martin’s chief creative officer and head of design. It continues the tradition of design focused on 1:3 proportions and includes a number unique design features, including new roof strakes that separate the body from the roof, and the ‘Aeroblade’ intakes in the front strakes.  These evolve from purely visual to functional and channel turbulent air down the side of the car into intake ducts by the C pillars and force the air out from the rear vertically as a 'virtual' spoiler providing down-force.

The bonnet is a 'clam-shell' design made from a single piece of aluminium. The DB11 does not use the older Aston Martin VH platform as the car features an all-new riveted and adhesive-bonded aluminium platform that shifts the emphasis from extrusions to stampings to create more cockpit space which would also underpin future Aston Martin models including the Aston Martin Vantage (2018) and the DBS Superleggera. 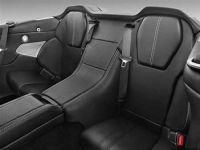 Embossed Strathmore leather comes as standard and gives absolute consistency in the cabin as you are surrounded by carbon fibre door infills.  As you whisk along you know you are in something special.  The Pirelli 20in tyres are fine on smooth roads but when it comes to ‘sleeping policemen’ you really do have to take care or it can become very expensive.  In the wet the trick is to be light on the throttle.

Aston Martin CEO Andy Palmer, who led the company through its recent London Stock Market launch, was guest of honour at the  Guild of Motoring Writers annual Royal Automobile Club dinner just a week back.  He spoke enthusiastically of 14,000 units a year by 2021 and the unveiling of an all new Lagonda Rapide next year.  If you are in the market for a very special four-seater make sure your private jet is available to take you to next year’s Geneva Motor Show!

He reminded the audience that work is progressing apace to complete the new St Athan, South Wales, production facility. The site, which started life as a series of Ministry of Defence ‘Super Hangars’, is being completely transformed into a state-of-the-art luxury car manufacturing plant.  It will be the marque’s second production facility and ultimately become the company’s ‘Home of Electrification’ when the  planned BEV models enter production.  It is also where Aston Martin Lagonda’s first SUV will emerge in the last quarter of 2019.

Not far from the RAC, Aston Martin Works’ new Heritage showroom in the heart of  Mayfair is now open for business. Situated with the Aston Martin Brand Experience Centre at 8 Dover Street, the outlet is a convenient destination for customers interested in acquiring a heritage model or learning about the restoration services available at Aston Martin Works Service in Newport Pagnell.

But for the rest of us it is just a place to gloat.

The car is the star!