In an exuberant mood with the prospects of winters in California and UK summers, Virgin Atlantic’s CEO Craig Kreeger was the guest of honour for the final Aviation Club lunch of 2018. 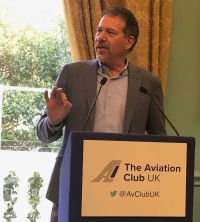 Kreeger retires at the end of the year and there was no mention of a prospective Virgin Atlantic pilot strike over the Christmas period (see in this issue). He has been in charge since 2013 and is now a “True Brit” (see AND FINALLY).

In a very well received speech, he laid much emphasis on Brexit and Heathrow’s role as a major world hub.

“It is for Parliament to decide whether the deal now on the table is the right one for the country, but we’re absolutely certain that leaving the EU without a deal would inflict significant damage to the UK economy and must be avoided,” he said.

Delta, Virgin Atlantic’s largest shareholder, came in for praise as he summed up the relationship. “We’ve been able to learn from each other, share best practice, get operational support in times of difficulty and create what I know is the most successful partnership in aviation."

His final 'dig' was at APD. “In nearly every speech I’ve given in the past six years, I’ve mentioned Air Passenger Duty – I’m nothing if not consistent," he said. "Because it’s still worth making the point that UK APD is the highest in the world.”