ON TOUR: Cruising the Thames on Waverley

Up the creek, but with a paddle – BTN editor Richard Cawthorne takes a trip with a difference down the Thames. 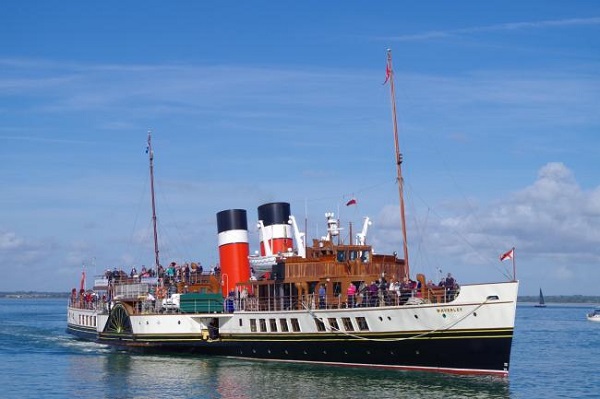 Exploring the Thames is a lot easier than it used to be, with a variety of craft to transport river fans up to Windsor or down to Greenwich and further afield. The choice ranges from the traditional tour boats and dining excursions from the likes of City Cruises and Bateaux London, among others, to the amphibious vehicles of London Duck Tours and the speed rides offered by the upstart rigid inflatables (RIBs), the aptly-named Thames Rockets being one example.

What many people don’t see is the long stretch of the river eastward beyond London as the Thames edges towards the open sea off Essex and Kent. Much of the scenery is admittedly a bit basic but this is an area with a long history and sights to see that evoke it.

A lot depends on the vessel you choose to take you there and that’s where Waverley comes in. She’s a paddle steamer but, as her promoters tell us, this is not just any paddle steamer but the last seagoing one of her kind in the world. Built on the Clyde, she is named after Sir Walter Scott’s first novel and made her maiden voyage on 16 June 1947 at the start of what became a long career.

Intended originally to sail only between Craigendoran and Arrochar in western Scotland, she was bought in 1975 at the end of her working life for £1 by the Paddle Steamer Preservation Society (PSPS), with the Waverley Steam Navigation Company, a charity registered in Scotland, set up to operate her. Suitably refurbished, the vessel thus began a second career as a top tourist attraction and since being in what is known as operational preservation has been awarded four stars by Visit Scotland, an engineering heritage award, and has carried more than 5m passengers from over 60 ports around the UK.

The latest restoration project was completed in 2003 and saw Waverley returned to the original 1940s style in which she was built. Contributions for the project came from the Heritage Lottery Fund and the PSPS. Contributions also came from Glasgow City Council, Scottish Enterprise Glasgow, the European Regional Development Fund and local authorities.

BTN caught up with Waverley at Tower Pier in London on a Sunday afternoon toward the end of her 2018 season of day, afternoon and evening cruises. The season has now ended but the 2019 timetable is being prepared and is scheduled to appear on the website in February.

The restored vessel is a fine sight at pierside, with towering funnels, timber decks and gleaming varnish and brass. The season typically starts among the Western Isles and Waverley then spends each summer exploring Scotland’s west coast before moving on to Liverpool and North Wales followed by the Bristol Channel and then the south coast of England in September and London and the Thames in October.

Our cruise was an all-day affair from Tower Pier to Southend, both ends of the journey fairly familiar but the outing offering a valuable insight, enhanced by the running commentary on board, into the story in between. Facilities on board along with plenty of outdoor and indoor seating included a traditional steamer “dining saloon” with refectory-style seating and fairly basic menu, plus two bars – one specialising in malt whisky – and the Caledonia Tea Room. Most impressive however was the engine room, open to viewing and apparently popular with young and old alike.

Familiar sights were prominent for the first part of the trip, graced by Tower Bridge opening in salute and followed in quick succession by Canary Wharf, the Isle of Dogs, Greenwich Pier, Cutty Sark and the 02 Arena, formerly the Millennium Dome, each with its story to tell.

The 10 steel gates of the 520m wide Thames Flood Barrier marked the border between the familiar and, at least for some of us, the lesser-known sights of the riverside. Prominent was Crossness, known as the Cathedral on the Marsh and, of all things, a former pumping station before being restored as an important industrial-heritage site.

Then it was under the QE2 Bridge and on to Tilbury and Gravesend before Waverley sailed in among the series of historic forts that dot the seascape as mute reminders of the days at various times in Britain’s past when invasion was imminent and this extra layer of protection was installed. Best known, with their stories faithfully told by the onboard commentary, are Shomemead, East Tilbury, Coalhouse, Cliffe, and the Maunsell Forts from 1943.

The end of our voyage was marked by the sight of Southend’s 1.3-mile wooden pier, another piece of the past, and free time in the resort for a walk along the front, bedecked with fish and chip shops (we dined ‘silver service’ but at sensible prices), and a fine modern pedestrianised shopping complex atop the cliffs with Southend Central rail station nearby.  c2c trains take you to London Fenchurch Street terminus, and you can change onto the DLR at Limehouse.

Waverley was a gracious hostess for a few hours on the water, a day trip with a difference and an insight into an unfamiliar side of London’s river. Certainly enough to encourage a trip on one of the many other options on the steamer’s timetable when the 2019 season starts next summer. 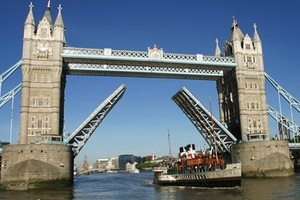 Southend Pier is not wooden. It is built on cast iron pillars and concrete piles with wooden decking.