After almost 10 years under construction, Shanghai’s new “earthscraper” hotel, built vertically along the precipice of an underground water-filled quarry, was unveiled to the public last week.

With cliff-view rooms that allow guests to stare into the abyss, the structure is said by British architect Martin Jochman who designed it to mark the first time an abandoned quarry has been used in this way.

The hotel developer is the Shimao Group. Chairman Xu Rongmao said he came up with the idea of the hotel because the abandoned quarry was a “wound of nature inconsistent with the green hills and blue water of Sheshan”.

The 336-room building has a restaurant and sports and recreation facilities, including rock climbing and bungee jumping, and an amusement park alongside at ground level.

Shimao says the lake below the hotel will be used for watersports and other adventure activities and there are plans to build a shopping centre on the site next year.

Shanghai claimed the title of “home to the world’s second-tallest building” in 2016 with the Shanghai Tower, a 632m 128-storey skyscraper in the city’s financial district. 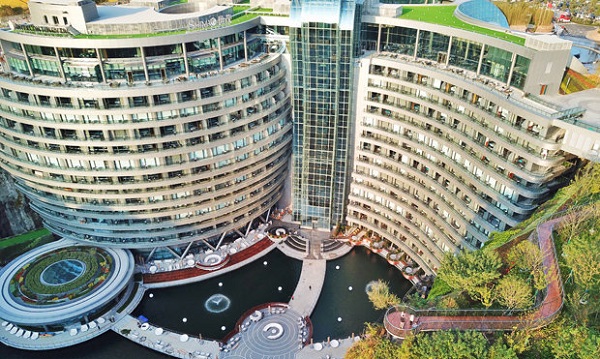