Drivers who park in cycle lanes could be fined under a proposal contained in a package of 50 road-safety measures from the government last week designed to promote the use of bikes in built-up areas. 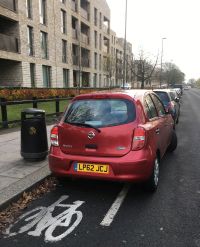 Local councils would be allowed to use cameras to police cycle lanes for the first time to prevent drivers blocking routes and impose fines of up to £70 for those found parking in bike lanes, rising to £130 in London.

Cycling and walking minister Jesse Norman said the 50 proposed new measures were part of the government’s plan to combat road rage, encourage greater mutual respect between road users and protect the most vulnerable.

“We are seeking to make cycling and walking the natural choices for shorter journeys, or as part of a longer journey, by 2040.”

The government said it would also review guidance in the Highway Code on how road users should behave in relation to cyclists and pedestrians, as well as other vulnerable road users.