With the festive season not far down the runway, Heathrow last week brought the popular stars of its recent series of holiday ads back into the limelight with another episode in the lives of Doris and Edward Bair. 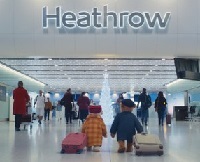 The couple, who have starred in the airport’s last two Christmas TV promotions, are this year returning to the UK from their Florida home after realising Christmas in the sun is not a match for the traditional British festivities.

Against the soundtrack of the 1980s’ Paul Young classic Every Time You Go Away, the Bairs rush back toward the UK winter, arriving – naturally – at Heathrow, where their story began 50 years ago.

The airport’s chief commercial officer, Ross Baker, said: “Britain’s love for Doris and Edward is overwhelming and has been since we first met them in 2016. It wasn’t a diffciult decision to bring them back.

“For many people, being close to the ones we love is what really makes Christmas special and of course for lots and lots of passengers, it’s Heathrow that makes it possible.”

And the Bairs get to stay an extra week when Heathrow is closed for a week because of snow!