The first flights on six new routes from three UK airports and the first to operate under the wholly-owned UK-based and UK-licensed Wizz Air UK’s own W9 IATA code were being celebrated by the airline last week. 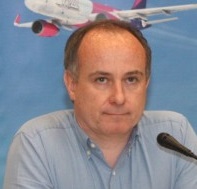 The new services connect Luton with Lisbon and Eilat; Doncaster Sheffield with Budapest, and Liverpool with Cluj-Napoca, Bucharest, and Iași in Romania.

They bring the total number of new UK services launched by Wizz Air in 2018 to 19, demonstrating according to a Wizz Air spokesman the airline’s continued commitment to bringing low-cost air travel to the UK market.

Wizz Air says it has carried more than 6m passengers on its 83 UK routes to 26 countries so far this year. By the end of 2018, Wizz Air UK will be operating five new Airbus A320s and four A321s with almost 350 jobs created at its Luton base.

Wizz Air UK was granted a UK route licence last month, which it says “future-proofs” the airline’s status as a UK carrier ahead of Brexit.

UK managing director Owain Jones said: “The new routes increase the many options to travel on one of Europe’s youngest and most efficient aircraft fleets to international cities and genuinely undiscovered places too.”