A rise in operating profit before exceptional items for 2018 of about €200m from a base of €2,950m in 2017 is being forecast by British Airways’ parent company IAG after results for the first nine months were released on Friday. 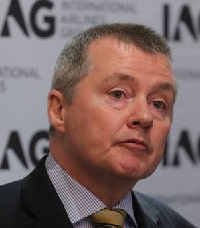 The third-quarter figures included what Reuters news agency described as “an unexpected profit increase as strong demand in Europe helped shield (the group) from rising fuel prices that have hit the industry”.

The agency said IAG, which also owns Aer Lingus, Iberia, Vueling and Level, beat consensus expectations of a fall in profits even as jet fuel prices increased beyond what the company had planned for.

IAG CEO Willie Walsh said: “The fuel price is certainly higher than we had expected ... (but) the general trading environment is good. We’ve seen high oil prices before, and we know what to do.” He noted Europe had been “especially strong”, without naming specific destinations.

Walsh declined to estimate the cost of this summer’s data breach at BA, now thought to have affected a further 185,000 customers (see story this issue).