Changes at Emirates Airlines that have already affected schedules at Edinburgh and Belfast (BTN last week) are now affecting Australian routes, with Airbus A380 flights to Sydney and Melbourne being downgraded to Boeing B777-300ER services. 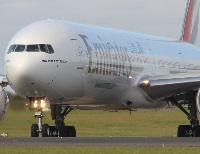 The Middle East carrier, which is in partnership with Australia’s Qantas, is also making changes to its sole daily Adelaide – Dubai B777-300ER service, bringing in a B777-200LR from 28 October to 30 November and again from 1 February to 15 April.

On Perth – Dubai, Emirates’ two current daily flights will be dropped to 11 flights a week from 7 November to 30 November and from 5 February to 15 April next year.

Emirates issued a similar statement to Australian media as in the UK last week, saying “these decisions were made after a recent review of our operations, which was undertaken to ensure the optimal commercial utilisation of our aircraft fleet."

Australian Business Traveller said it had also been advised none of the Boeing B777-300ERs replacing the A380s on flights from Sydney and Melbourne would be fitted with the Gulf carrier’s “swanky new First Class suites”.