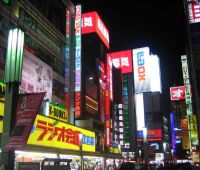 AMERICA AND JAPAN have reached an agreement to fundamentally relax the current bilateral air agreement between the two countries.  In essence it is similar to that struck between the USA and Europe which came into effect earlier this year.  It should also be a boost for Japan Airlines, currently trying to restructure under the watchful eye of the government.  Another beneficiary could be American Airlines who, under the current regulations, were not allowed direct flights.  Secondary (major) cities on both sides of the Pacific will also profit with the possibility of non-stop services. Wall Street Journal