Hawaii to London via Boston

A new Hawaii – UK routing has opened up with the introduction of a five-times-weekly service by Hawaiian Airlines between Boston and Honolulu (HNL) next April. 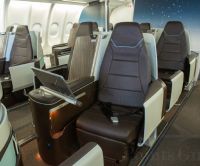 Traditionally if you wanted to go between the Pacific islands and Britain, the way was via Los Angeles, although there were alternative routings from the west coast and Hawaiian Airlines began operating a JFK – HNL daily service in 2012.

The Airbus A330 operation will also become the longest domestic flight route in the United States at 5,095 miles and will have a 2+2+2 flat-bed Business Class, Economy Comfort 2+4+2 with 36in seat pitch, and Economy at 31in.

The new flight will go into service on 4 April 2019, and will be offered five days per week. Flight time from Honolulu is just over 10hr and in the other direction 80min longer.

Hawaiian Airlines' flight HA90 was given this number in honour of the airline’s upcoming 90th anniversary.