It was a packed Aviation Club, plenty of bankers and city types, but not that many airlines, who last week came to London’s Institute of Directors to hear Steven Udvar-Hazy, the doyen of the aircraft leasing business. 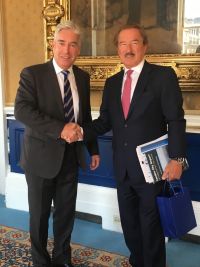 Udvar-Hazy (72), a US citizen, fled his native Hungary in 1958 following the Soviet occupation. He helped to found ILFC in 1973 and now heads Air Lease Corporation. As of the end of 2017, Air Lease reported ownership of 244 Airbus, Boeing, Embraer and ATR aircraft, which it leases to more than 91 airlines across 55 countries. It has close on 400 aircraft on order.

Udvar-Hazy's belief is single-aisle aircraft will increase their dominance of the global airline fleet as it grows over the next decade. They had upped their share from 70% to 75% of in-service commercial aircraft. "That trend will continue," he predicted.

He singled out the long-range narrowbody Airbus A321LR as a crucial aircraft in the medium-haul market, suggesting that "we will see a lot more of them on transatlantic routes" because the variant offers "close to the Boeing 757's capabilities, but uses 30 to 35% less fuel".

As regards the Airbus A380, he summed it up: "How do you estimate residuals when so much of the fleet is in the hands of one airline?"