A 41% increase in passenger traffic since the beginning of 2018 compared to the same period last year was reported by Kazakhstan carrier Qazaq Air last week as it celebrated its third birthday. 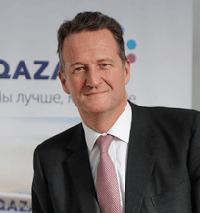 The airline carried its first commercial passengers on a flight between Almaty and Astana on 27 August 2015 and to date more than 650,000 people have flown on the airline’s Bombardier Q400 NextGen aircraft.

The 2018 to-date figure is 210,000 passengers with an average load factor of 80%, seven percentage points higher than last year, while the airline says it has maintained on-time performance.

By the end of this year, Qazaq Air says it plans to have transported 700,000 passengers, maintaining its position as the fastest-growing airline in Kazakhstan.

Founding CEO Blair Treherne Pollock said: "In three years, Qazaq Air has achieved its main goal of providing Kazakhstan citizens with safe, affordable regional air travel, especially in those areas where there was a shortage of air transportation.

“But we are not standing still; next year we plan not only to increase our fleet, but also the geography of flights by including the most popular cities of neighbouring countries in our route network."