India's first test flight powered by biojet fuel was carried out last week by the country’s fourth-largest carrier, SpiceJet, in a development hailed as marking a new chapter in the fast-growing domestic aviation sector. 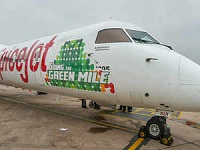 The nearly-45min flight from Dehradun to Delhi was operated with a Bombardier Q400,  partially powered by fuel made from the Jatropha plant, elevating the airline into the elite club of countries to have operated flights on alternative energy sources.

Developed countries including Canada, Australia and the US have already conducted similar test flights and ten years ago a Virgin Atlantic Boeing B747 flew from London to Amsterdam with one of the four engines powered by biofuel.

The trend has continued – in January this year, the world’s first dedicated biofuel flight flew from Los Angeles to Melbourne. The objective is to make air travel cheaper in the face of increasing prices for standard fuel – in India, domestic aviation fuel rates are now  almost double that in February 2016.

The International Air Transport Association (IATA) has also set a goal to cut carbon emissions for the industry by 50% by 2050 and it has been estimated biofuel has the potential to reduce aviation carbon emissions by up to 80%.