Flights between Antwerp and London City have escaped a realignment by Belgian carrier VLM which has seen all but two scheduled services being suspended in favour of concentrating on charter operations. Antwerp – Zurich is also retained. 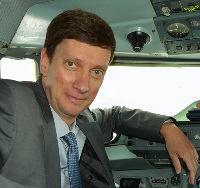 The Antwerp-based company said in a statement it had decided “to temporarily reduce its scheduled flights activities”. Services between Antwerp and Aberdeen, Birmingham, Cologne-Bonn, Maribor, Munich and Rostock will stop “in the coming weeks”, it added.

The statement, issued in the name of chief executive Johan Maertens, who was appointed only in June, added that new routes from Antwerp and Ostend-Bruges to Manchester will be postponed.

Maertens said it was common within the industry “for destinations and flight frequencies to be constantly evaluated and adapted according to the season, the performance of existing routes and new opportunities that arise on the market”.

Aircraft capacity would be deployed on routes and activities that are more in demand and that are profitable, he added. VLM is also cutting its fleet, with new aircraft coming in next year to replace the current Fokker 50s.

VLM filed for bankruptcy protection in 2016, with Dutch company SHS Aviation taking over the company with a view to rebuilding its operations.