Football fever handed a bonus to Scandinavia’s largest regional airline Widerøe on Friday as the carrier operated the first flight of its new two-a-week schedule between Bergen in Norway and Liverpool John Lennon Airport. 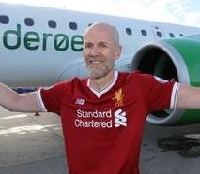 The service, with departures on Fridays and Mondays, began just in time for the start of the Premier League season, with many passengers on the first flight from Bergen being Norwegian Liverpool supporters.

Fans were able to fly direct for the first time to attend Liverpool’s first home game of the season yesterday, Sunday. Among the passengers was Widerøe chief financial officer John Arntsen, a keen follower of Liverpool FC himself.

Widerøe operates a 114-seat Embraer E190-E2 jet aircraft on the route and the airport fire and rescue service gave the aircraft a traditional airport welcome with a water cannon baptism.

Staff from Marketing Liverpool were also on hand at the airport to give out information on the city to arriving passengers as they disembarked the aircraft.

Bergen is Norway's second largest city, a business centre and also the gateway to the fjords, with the new direct service giving passengers from across the North West the opportunity to visit for business and afterward to explore the dramatic countryside.