Chinese carriers achieved two firsts with the Airbus A350-900 last week. National flag carrier Air China took delivery of its first, and Sichuan Airlines acquired another on lease from AerCap.

Air China’s A350-900 features a three-class cabin layout with 32 seats in Business, 24 Premium Economy and 256 Economy. The airline will operate the new aircraft initially on domestic routes with international operations to follow.

Sichuan Air, the largest all-Airbus fleet carrier in China, will offer a two-class cabin layout with 28 seats in Business and 303 in Economy. The airline will also use the A350-900 initially on domestic services, followed by its international “Panda Routes”.

Sichuan Air’s all Airbus fleet includes 123 of the A320 Family and 12 of the A330 Family. In 1995, it became the first to operate an Airbus fly-by-wire aircraft on the Chinese mainland, with the A320. It was also the first operator to take delivery of a Tianjin-assembled A320 Family aircraft. 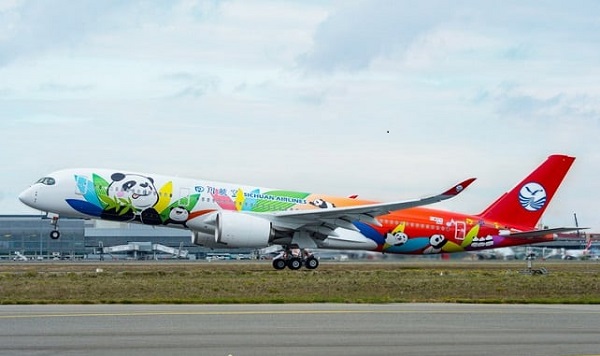