The first production-line installation of the new Atmosphère cabin is scheduled to be unveiled by Bombardier at Farnborough next month on a CRJ900 which will form part of a new order for 20 of the aircraft announced last week from Delta Air Lines.

Bombardier says it will use the air show unveiling as the centrepiece of a post-CSeries focus on the 60-100-seat regional aircraft market which company president Fred Cromer says Bombardier can dominate with the CRJ900.

Cromer said on Thursday the regional jet was capable of winning “half or more” of the market against competing models from Embraer of Brazil, especially the E175.

With its new order, valued at $961m at list prices, Delta becomes launch customer for the Atmosphère cabin. The aircraft are scheduled for delivery between late this year and the end of 2020 to replace older regional jets at Delta Connection operators.

Bombardier, which launched the CRJ programme nearly 30 years ago and has around 2,000 regional jets in the air, claims a 30% US market share over the past two years.

However, the company says its slice of the global 60-100 seat market has grown over the past two years to 42%, helped by the launch of the Atmosphère cabin and 90-seat Q400 turboprop. 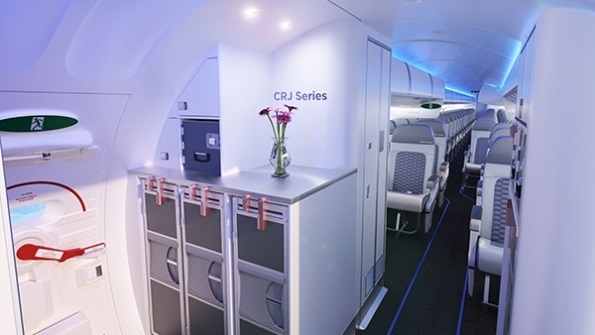