Future development at Rotterdam The Hague Airport in the Netherlands is being put on hold amid controversy over airspace reorganisation, which has been delayed until autumn next year. 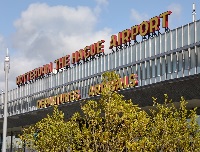 Airspace has to be rejigged to cope with the planned expansion of Lelystad Airport, which is supposed to take over charter flights from Amsterdam Schiphol from 2020. Ministers are refusing to sanction more flights for Rotterdam until the delay is solved.

Rotterdam was hoping to expand after processing a record 1.8m passengers last year. The government’s decision to freeze development is its second setback after a court in March refused to allow an extension to the terminal, saying it would be too big.

The airport is however forging ahead on one front with plans to test a new autonomous-vehicle baggage sorting system named Fleet which is being developed by Dutch logistics-automation company Vanderlande.

Matching similar developments at other airports, the system uses automated guided vehicles (AGV), each of which carries and sorts one bag. The vehicles use what is known as “swarm” intelligence and advanced data analytics to find an optimal route through an airport, replacing the need for fixed conveyors and sorting systems.