Your editor in chief spent yesterday (Sunday 17 June) at The Imperial War Museum (IWM), Lambeth, signing copies of London City Airport – 30 Years Serving the Capital. It was busy with around 4,000 visitors, a simply brilliant exposition and it is free. 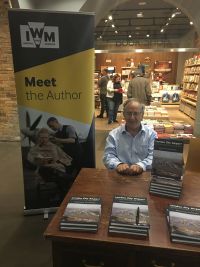 “Not as much fun as giving talks on the airport,” he said.  “Once again some who came up were airport users and complained to me that a particular destination was not on the roster.  Write to the airlines was all that I could say!”


London City Airport visitors are reminded that the book is available LCY ‘airside’ in WH Smith (but not ‘landside’.  Ask WH Smith to explain.  People want to pick the heavy book up on their way home!).  Ask for the book at the Docklands Museum in Canary Wharf, best reached via WestFerry or West India on the DLR.  Stocking LCY 30 is Foyles wonderful bookshop close by Tottenham Court Road, or you can go to the Crécy web site.


What’s the most read section?  According to Malcolm it is not the airport development but the 30-year parallel Timeline.   What year did the House of Commons first elect a women speaker?  It’s in the book.

As a youngish reporter I remember covering some of the rowdy public meetings between local residents and airport developer Mowlem. Residents never did believe Mowlem’s assertion LCY would be limited to turboprops only. One wonders what they make of it now. Incidentally, Hong Kong’s Chek Lap Kok airport celebrates its 20th birthday this year on July 1. Current and former Airport Authority staff are planning a host of celebrations.