Ryanair and the unions

Ryanair has announced the signing of a second cabin crew union recognition agreement with Unite the Union, who will now be the representative body for Ryanair directly employed cabin crew in the UK. This agreement follows Ryanair’s first cabin crew recognition deal with the Italian ANPAC/ANPAV unions just a week ago. 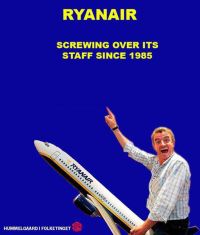 This cabin crew recognition agreement follows extensive negotiations with Unite the Union and covers the UK market, which accounts for approximately 25% of Ryanair’s fleet.

Unite’s general secretary Len McCluskey said it was a historic agreement and a significant step by the airline.

“For the first time ever Ryanair’s UK cabin crew will have a recognised union in their corner to deal with workplace issues and collectively bargain on pay.

“Over the coming days and weeks Unite will be seeking similar agreements with the employment agencies which indirectly employ the remainder of Ryanair’s UK cabin crew.”